Loki Writer Was 'Terrified' About Complexity of Disney+ Show 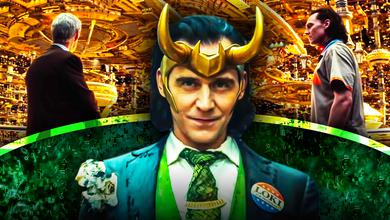 Marvel Studios' third Disney+ show Loki is less than a week from its debut, with the show's promotional tour ramping up in a big way recently thanks to the cast and crew. The show's streaming home is preparing fans with the latest episodes of Marvel Studios: Legends centered around the God of Mischief and the Tesseract, setting the stage for the anti-hero's next adventures

The show's behind-the-scenes leaders have been the subject of numerous interviews over the past few weeks, sharing their experiences making the show and their thoughts what Tom Hiddlston's lead character is about to encounter. Head writer Michael Waldron helped explain how the show will tackle time travel, while another chat saw him gush over how fun it is to write for the character.

Loki's director got in on the fun recently along with Waldron, speaking about some of the more nerve-wracking parts of developing this series.

FEAR OF LOKI: GOD OF MISCHIEF?

Loki director Kate Herron and head writer Michael Waldron spoke to Digital Spy about what they want to accomplish with the MCU Disney+ show.

Herron described wanting to "pay respect and homage to a character that people love" while at the same time making sure that "there’s a reason why [they're] going back in." This is all to have the series "taking Loki to fresh ground" for the God of Mischief's next round.

Waldron was worried that longtime Marvel fans may see Loki as too complex and complicated, calling it his "biggest fear" and something that "keeps [him] up at night."

The writer's room helped quell that fear by "establish[ing] a logical foundational sci-fi reality" with the Time Variance Authority, meaning the team "had to create rules, and build out what do they do," according to Waldron:

"We had to establish a logical foundational sci-fi reality for the show. It’s the TVA. They police time. That meant that we had to create rules, and build out what do they do? Why do they do it? For the writers’ room, they all had drawings and stuff like this on the whiteboards."

Waldron broke it down by explaining how he and the team tried to "boil this down into a very simple way" to "understand what Loki is going through" without over-explaining anything.

Describing himself as the show's "harshest critic," he was always looking for ways to cut out portions of the plot that may not work simply because he "fall[s] asleep easily in anything:"

"And that necessitates really complex explanations and ideas. Then you have to figure out: 'OK, how can we boil this down into a very simple way so that the audience is going to understand what Loki is going through, but they’re not going to feel like they’re in science class? They’re not going to tune out because they’re bored?' I’m very easily bored. I fall asleep easily in anything."

Herron made sure to point out that Loki will put its central anti-hero "in a very different place" than any in which he's been over the past decade. This will be "a very unique, new journey" with Loki "working out who he is" and making an effort to "undo this mess he’s made with time:"

"Loki's in a very different place to where we’ve seen him in the last 10 years. We’re taking him on a very unique, new journey. It’s him working out who he is, and trying to basically undo this mess he’s made with time, with the TVA."

Marvel Studios is known for having a master plan not only in terms of the specific projects that come to fruition, but also in terms of intricate story details that flow through each individual movie and TV series. These quotes from Waldron and Herron make it abundantly clear that they're right on board with this same process to bring Loki up to that MCU standard.

Considering this is the Loki variant from The Avengers along with his journey through time and space with the Tesseract, Loki has the chance to take him to places never seen before within the MCU. Particularly with the introduction of Owen Wilson's Mobius and the TVA coming into play, the God of Mischief's skills will quickly be put to the test while he's on the run.

Loki will begin streaming on Disney+ on June 9.