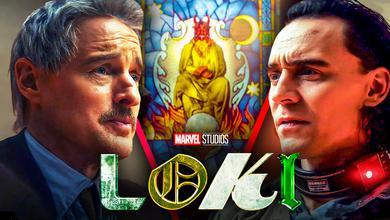 Warning - This article contains spoilers for Episode 1 of Loki.

Loki’s series premiere has officially debuted on Disney+, meaning that viewers far and wide are busy dissecting and discussing the happenings of the latest episode.

“Glorious Purpose” recontextualized what fans previously knew about the rules of the MCU, shedding some light on the predetermined nature of the universe’s timeline and revealing that Infinity Stones may not be as scarce as they were made out to be.

Episode 1 of Loki even unveiled who the primary villain of the series will be, with another version of the God of Mischief set to cause trouble for the show’s variant protagonist.

One sequence in particular opened up many questions about how the plot will unfold, that being Mobius’ introductory scene in Aix-en-Provence. From demonic allegories to explosive bubblegum, there are a few interesting details and Easter eggs that could be pertinent to the remainder of Loki’s story…

THE DEVIL’S IN THE DETAILS

Agent Mobius and his fellow TVA agents are first seen investigating a Nexus event in 1549, taking place in a cathedral in France. It is revealed that the murder scene lines up with others that the TVA have encountered, though the crew are light on evidence. Luckily for them, a young boy happens to run by the scene of the crime.

When the child is asked for the identity of the perpetrator, he points towards the cathedral’s stained glassed artwork of the Devil.

So, to address the question on everyone’s mind: Is this Mephisto?

Loki’s director Kate Herron says no, and that the devilish imagery is first and foremost to be an allegory to The God of Mischief instead:

"It's honestly just a super weird coincidence. Like, it's genuinely a reference to Loki -- the horns, he was cast out of heaven, that's what it's a reference to.”

Though Loki’s director may have been playing coy here, it is still possible that she is indeed telling the truth in this case. It is revealed that Agent Mobius has been trying to track down another version of Loki, so it is very possible that the child saw the God of Mischief’s horned appearance and mistook them for the Devil himself. A 16th Century child in France is less than likely to know all things Norse mythology, so we can’t really blame the kid for making an honest mistake.

That said, there is still the potential for this artwork to be Mephisto. Imagery aside, Mobius even says “Devil bearing fruit” upon retrieving the Kablooie bubblegum from the young boy (more on that later).

While it is indeed possible that the artwork could be depicting Mephisto and presenting him as the MCU’s version of the Devil, it is unlikely that he’ll be the villain of the piece this time around. The final moments of the episode reveal that another Loki variant will be headlining the show as the main villain, which leads nicely into the next key item found at the cathedral…

YOU’VE GOT BLUE ON YOU

Since Episode 1 heavily indicates that the Loki being hunted by the TVA is the top suspect at this crime scene, it is time to turn to the evidence that they left behind: Kablooie bubble gum.

Though the sweet treat appears for a small fraction of the scene, there is a lot to unpack here. The name of the gum in itself is interesting, with kablooie (or more often times kablooey) being an onomatopoeia for an explosion. Is this Loki deranged enough to blow up his victims with candy?

The packaging of the wrapper seems to be significant as well, bearing blue stripes with a peculiar looking symbol on the right side. The stylized icon seems to be troll-like in appearance, vaguely resembling the MCU’s Frost Giants. Going by this theory, this may be a representation of Loki in his Frost Giant form considering he seems to be the only one of his race to keep his hair. Perhaps this version of Laufeyson has embraced his Jotunheim heritage, choosing to no longer hide his true self.

This might reveal the origins of this Loki, possibly coming from a timeline where he led the Frost Giants to victory against Asgard in Thor or never left his race in the first place.

The connection to Jotunheim may be supported by the effect that Kablooie has on its consumers: turning their teeth blue. This looks eerily similar to the dentures belonging to the Frost Giants, driving home the idea that Loki has his fingerprints all over this situation.

GUM FOR THE MODERN MAN

The gum is also notably anachronistic, possessing a modern style for its covering. Flavored gum wouldn’t even be invented for another couple of centuries, so it is peculiar that the treat would find itself in 16th Century France.

What makes it even more peculiar is that Mobius doesn’t expect to find a temporal aura or sequence period on the item, considering that a weapon belonging to Loki at the end of the episode is revealed to originate from the beginning of the third millennium. What makes this gum so special, and why is it so hard to trace? The God of Mischief works in mysterious ways, so perhaps he found a way to mask the time signature of his merchandise to hide his trail.

So what is Loki’s goal with the gum? Is this simply a calling card to keep Loki’s pursuers on their toes, or does the Kablooie gum have a greater purpose? Is he trying to create a Frost Giant army, or is the God of Mischief just trying to send his victims to Ye Olde dentist’s office? It is also revealed that Loki is stealing reset charges from the TVA, so perhaps he is attempting to manufacture a timeline where the Frost Giants rule over the Nine Realms.

AN ACT OF TRICKERY

With their time spent and no more leads, Agent Mobius and his crew reset the branching timeline before returning to headquarters. But what if the answer was right in front of them?

What is a child doing at a murder scene? Why is he unfazed by the horrors committed in the church before him? How exactly did he get that Kablooie bubble gum? His appearance at the crime scene does seem a little too convenient.

This makes one wonder: What if Loki masqueraded as the child to mess with the TVA? Loki is the God of Mischief after all and is quite accustomed to shape-shifting into other people. Perhaps this Laufeyson variant used this very skill here, taunting his pursuers without them even knowing it.

This may even tie into Kid Loki, a version of the character from the comics and a possible variant that is rumored to make an appearance in the series. A propensity for shape-shifting may the reason why the Loki being hunted down is so elusive in the first place, using his trickery to throw the TVA off his scent.

There are limitless possibilities as to how the devil and his gum could affect Loki going forward, but it can't be denied that a confection-leaving Loki on the loose spells for certain trouble. Will the bubblegum actually go kablooey or is the God of Mischief going to reveal himself to be Mephisto?

Hopefully, Loki will answer these questions and more as the series progresses, but for now, fans can continue to watch and rewatch the series premiere now on Disney+.