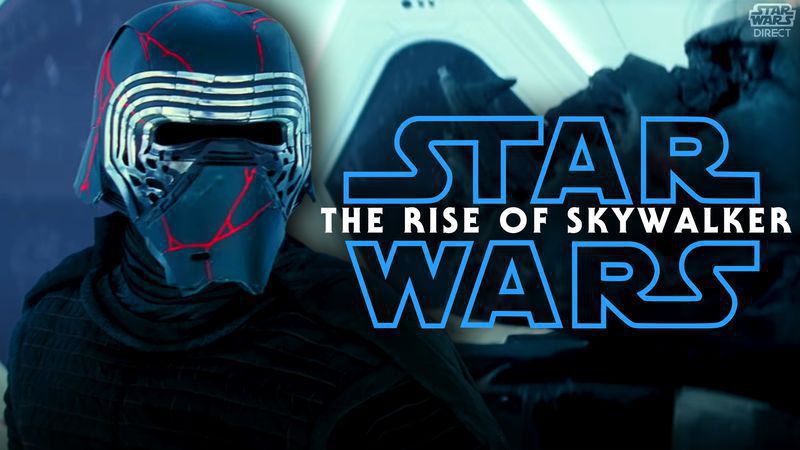 The reveal of Darth Vader's melted helmet in The Force Awakens' second teaser trailer sent fans into a frenzy. In the full trailer, we learned that the then-new villain Kylo Ren was in possession of the Sith Lord's ghostly remains, a character we would later learn is Vader's grandson. Ren's moment with his grandfather's mask in Episode VII proved to be a hotly discussed topic, as fans were given a look inside Kylo's head and saw a bit of his motivation. The helmet was absent from 2017's The Last Jedi, with only few mentions of Vader's name in it's place. But what was once thought to be an abandoned concept resurfaced in Episode IX. It's been a little over three months since The Rise of Skywalker hit the big screen, and we're still learning more about the film - details about what appeared on screen, and what never made it.

Images have recently surfaced that reveal an unfinished scene featuring Kylo Ren and the mask of Darth Vader. The images, from Imgur via ComicBookMovie, show what appears to be a second moment between Ren and the remains of his grandfather following his vision earlier in the film. Check out the images below!

Kylo Ren is a character obsessed with legacy. Despite what he preaches, he's a person completely defined by his past, unable to let go of his family. His ancestry was kept a secret from him until Leia's parentage was revealed on a galactic level in Claudia Gray's novel Bloodline, which took place shortly before Ben Solo's turn to the dark side. At some point, he formed an idolization for his grandfather's dark past, one that may have even contributed to his own descent into darkness, and acquired the helmet that was burnt on Endor shortly after the destruction of the second Death Star. His coversation with the mask was an interesting concept in The Force Awakens that didn't seem to have closure - and this scene may have been just that.

It's anyone's guess as to when this moment could've taken place in the film, and how this moment impacted Kylo. In the beginning of the film, his world is rocked when The Emperor reveals that he was behind all of the voices Ren had heard in his head, including Vader's. We know that Kylo had believed Vader had shown him the power of the dark side at some point, given his monologue to the helmet in The Force Awakens. Perhaps this sequence was to show Kylo coming to grips with the lie that he had thought was one of his guiding forces? By this point, Kylo was hanging onto the dark side by a thread. This scene was likely intended to show a last ditch effort on his part to find darkness, while simulatneously showing us that he was closer to finding the light than ever.