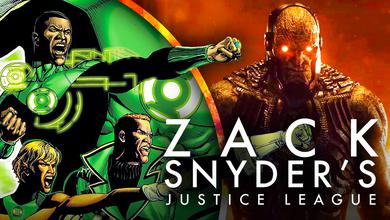 The long wait for the debut of Zack Snyder's Justice League will soon be over, and the excitement from fans is mounting. The four-hour version is expected to be vastly different from its theatrical predecessor back in 2017, and the marketing for the film clearly drove that point home.

So far, Snyder is at the forefront of the promotion for his Justice League, with the director sharing numerous bits of information about his version of the film on a consistent basis. Snyder's barrage of reveals ultimately painted a picture of what to expect for his cut, but it's still being made clear that there are surprises that have yet to be revealed.

Now, it looks like some of those may have been unveiled in a brand-new trailer for the film.

A SURPRISE TRAILER FOR THE SNYDER CUT

The official Twitter account of Zack Snyder's Justice League revealed a brand-new trailer for the film, showcasing the vastly different narrative of the upcoming version.

Notably, the trailer offers a glimpse at a Green Lantern member as Steppenwolf states: "This world is divided. No protectors here. No Lanterns, no Kryptonian. It will fall in his name."

A GREEN LANTERN SIGHTING IN THE SNYDER CUT

From this version's dark and gritty tone to the addition of new characters like Darkseid and Joker, the latest trailer offers more clues about the plot of Zack Snyder's Justice League, and it should help fans understand that this will be a different movie experience.

After only being mentioned in the theatrical cut, Darkseid is expected to take center stage in the Snyder Cut, and this spells trouble for the rest of the League. The trailer manages to provide a sneak peek of the insane power levels of the villain, and the extended look in the film will become a must-see.

Meanwhile, the fact that the trailer places the spotlight on Yalan Gur of the Green Lantern Corps. could hint at the intergalactic team's more prominent role in the Snyder Cut. In DCEU canon, it wasn't established which Green Lantern is currently patrolling Earth during Justice League, but it's possible that answers will be given when the film debuts on HBO Max.

To recap, this sneak peek also offers glimpses of Martian Manhunter's transformation into Martha Kent, new looks at the history lesson sequence, and an action-packed final stand against Steppenwolf.

All in all, Zack Snyder's Justice League is shaping up to be a unique DC experience, and this trailer should be a testament to that.