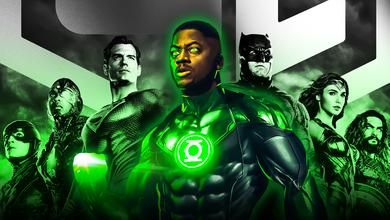 Even with a four-hour director's cut, some elements of Zack Snyder's Justice League failed to make their ways to HBO Max screens.

Snyder's superhero squad notably lacked one key member from the comics in the form of a Green Lantern. Through interviews and concept art, Zack Snyder has since confirmed a John Stewart iteration of the intergalactic ring-bearer was primed to appear in the movie, but was ultimately cut.

Snyder recently revealed an actor was cast and filmed scenes as Stewart, but he is not sure if those scenes will ever see the light of day.

In an interview with LightCast, Green Lantern actor Wayne T. Carr opened up about his role as the DCEU's John Stewart being cut from Zack Snyder's Justice League.

While Carr went into his first viewing blind, he did know as far back as "August [2020]" that he would not be appearing in the director's cut.

"[Zack] said, 'We're going to shoot it, we'll see what the studio says.' This is kind of crazy because we shot it in what I'm going to call 'Driveway Studios.' He called me after he showed it to everyone, I think it was the second time because they had watched it in parts. He was like, 'They're not letting me do this thing.'"

Regardless of his part being cut, Wayne emphasized how happy he was to see Snyder's complete narrative realized, especially concerning Ray Fisher's Cyborg.

"It was awesome. I watched it all the way through, and so many emotions went through my body. For one, I was just ecstatic for my boy Ray [Fisher]. I was pumped for him, man. It was completely different, and I was just like, 'There! There he is! Everybody gets to see my boy right now. That is dope.' It made me really, really excited and emotional."

While Carr's John Stewart will likely never see the live-action light of day, fans did get a glimpse at what his John Stewart would've looked like through concept art. Carr mentioned he was admittedly disappointed to not be in the movie, but has been happily overwhelmed with the love he's received from fans.

"When I saw the full vision, I went through the journey like everybody went through the journey. Towards the end I realized, 'Ugh. I'm not a part of this. Darn.' The thing that kind of just warmed my heart was once all of the concept art and stuff started to drop, it's been nothing but love from the fans, man. Like, I wasn't even in the movie, and I'm just getting positive feedback from people and support. It's super crazy. It's absolutely crazy, but I love it."

It's unfortunate that Carr's scenes will likely never make their way out of the vault, but his support for Snyder and Fisher is welcomed.

Carr's situation is not all that uncommon for massive comic book crossover movies. 13 Reasons Why star Katherine Langford's scenes as a teenage Morgan Stark were famously axed from Avengers: Endgame, and the actress's future as the character remains uncertain as a result.

With just about every character getting the spotlight in Snyder's four-hour epic, Carr's John Stewart appears to be the only casualty from the limited studio interference. Warner Bros.' decision to cut John Stewart from Zack Snyder's Justice League puts a greater emphasis on the upcoming Green Lantern Corps series on HBO Max, as the studio likely wants to avoid continuity confusion.

Warner Bros. has made their future DCEU intentions clear as they begin to move on from the Zack Snyder era. Including Carr's Stewart in the Snyder Cut would've ultimately led to unnecessary confusion between that character and wherever the Green Lantern Corps intend to take him in their show.

It's not all bad news for Carr though. There is every possibility he could be cast in the HBO Max series and the studio cut his part from Snyder's Justice League so the Green Lantern Corps showrunners would have complete creative freedom and not feel obliged to continue whatever Snyder set up.