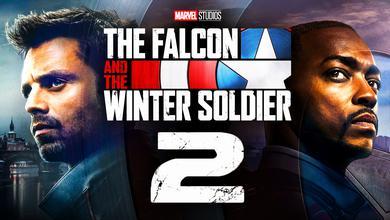 The Falcon and the Winter Soldier is approaching its endgame, but fans are hoping that this will not be the end of the line for the series. Created by Malcolm Spellman, the show follows the post-Avengers: Endgame adventures of Anthony Mackie's Sam Wilson and Sebastian Stan's Bucky Barnes, with the pair trying to navigate life without their best friend, Steve Rogers.

A world without Captain America is one of the topics that the show tackled early on, but the introduction of Wyatt Russell's John Walker as the new Star-Spangled hero made everything complicated. As expected, Sam and Bucky didn't approve of the government's replacement, but they were forced to work together to bring down a terrorist group known as the Flag Smashers.

During the first five episodes, Sam and Bucky's dynamic was pushed to the forefront alongside the downfall of Walker as Captain America. Alongside those story beats, the series also showcased the MCU returns of several favorites like Daniel Brühl's Zemo and Emily VanCamp's Sharon Carter.

While fans are anxiously waiting for the explosive finale of The Falcon and the Winter Soldier, a new interview with one of the head executives of Marvel Studios may have offered a glimmer of hope about a second season for the show.

Marvel Studios Vice President of Production & Development Nate Moore recently sat down with Indiewire to talk about the Disney+ slate of the MCU, and the potential second season of The Falcon and the Winter Soldier was discussed.

Moore started off by breaking down the decision to launch the project as a drama series, admitting that “it does feel a bit more dramatic than some of our typical stuff.” The Marvel producer also revealed that the long-form storytelling approach “was appropriate” for what the show is “trying to tackle:”

“[The decision] came about sort of as the series was launching, but it was something we were thinking about even as we were making it — not because we think, ‘Oh my God, it’s so great,’ but because it does feel a bit more dramatic than some of our typical stuff. As this is sort of our first foray into television, even if it’s Disney+, we thought [the category placement] was appropriate for what the show is trying to tackle.”

Even though Moore pointed out that Marvel “always wants the possibility” for more seasons for the Disney+ shows, the head executive played coy about a potential sophomore run for The Falcon and the Winter Soldier. He only teased the fact that they “definitely kicked around ideas” about it:

“We’ve definitely kicked around ideas because we always like to keep thinking about where things can go, but we also, frankly, in the crush of the pandemic, we’re just trying to finish the show and make sure it got out in a timely matter. Hopefully, at the end of this season, you will see the potential for what we could tell in a subsequent season.”

On a separate note, Moore discussed the future of WandaVision, pointing out that it's a “show you can only do once” since Wanda “can't go back into that reality.”

The producer then acknowledged the fact that the story of the Anthony Mackie and Sebastian Stan-led project has the potential to be revisited “in subsequent seasons because it's an evergreen story:”

“I think ‘WandaVision’ is a show you can only do once. She can’t go back into that reality. That is such a complete arc of what that character can do and what that story wanted to do, whereas ‘Falcon and Winter Soldier’ is really about dealing with, to me, the legacy of what a superhero is, through the lens of Captain America and his shield, but ultimately through the lens of all these different characters. And that’s a story I think you can revisit in subsequent seasons because it’s an evergreen story. It’s a conversation.”

When the Disney+ shows were announced during 2019's San Diego Comic-Con, fans were curious if these projects would only run for a limited season or would be renewed for another slate of episodes on the streaming service. Based on Moore's comments, it looks like The Falcon and the Winter Soldier falls under the latter, and this should be good news for fans of the series.

It makes sense for Marvel Studios to take a risk and create a second season for The Falcon and the Winter Soldier since it creates more story opportunities for both the characters and the MCU. The chemistry between Anthony Mackie and Sebastian Stan is an added bonus, and a sophomore run has the potential to show a different side of Sam and Bucky's dynamic moving forward.

Moore's remarks about the story of the Star-Spangled series as something that one can “revisit in subsequent seasons” is a fitting description. Many would agree that the show is already doing a good job in terms of presenting underlying political themes while also being used as an avenue to tackle racial issues along the way.

If Marvel decides to greenlight a second season, then it presents more opportunities for The Falcon and the Winter Soldier to reignite the conversation about topics that matter. This is on top of universe-building story possibilities such as including more cameos from the stacked MCU roster as well as featuring live-action debuts of Marvel Comics characters.