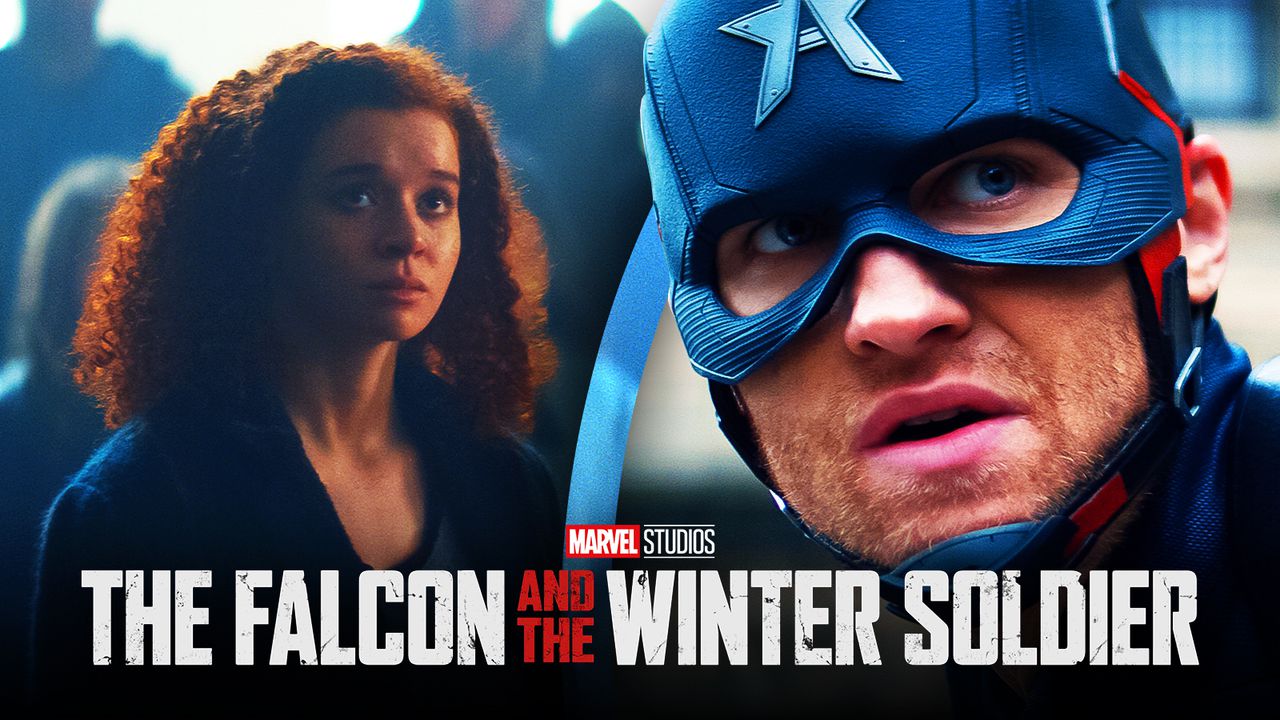 Warning - This article contains major spoilers for "Episode 4" of The Falcon and the Winter Soldier.

The Falcon and the Winter Soldier is back with another week of bombastic action and big reveals, closing its second act with "The Whole World is Watching." When we last saw our titular heroes, things were heating up after an unlikely alliance formed between Sam, Bucky, and Zemo.

The show's fourth episode slowed down to explore this dynamic a bit more, and it looked at how John Walker's Captain America fits into all of this. Needless to say, the episode was another belter and left the narrative in an interesting position going forward...

Following on from last week's final moments, "The Whole World is Watching" opened with a return to Bucky's time in Wakanda. While Sam is busy being primed to become the next Star-Spangled Man, the former Winter Soldier has largely spent the series delving into his dark MCU past.

The moment between him and Ayo in Wakanda was different though, seeing a moment of relief for Bucky as he realized that he is finally free. "Episode 4"'s opener was not only a great way to see another moment set in between movies, but it also served as a neat way to establish Ayo and Bucky's relationship right off the bat.

After a ragtag group of Sam, Bucky, Zemo, John Walker, and Lemar Hoskins assembles, the team moves to intercept Karli Morgenthau. Rather than head in for an all-out brawl, the Falcon decides that a negotiation is the apt approach.

While there was the risk that the scene could have easily veered into a "we're not so different, you and I" type of speech, this moment is filled with nuance and interesting insight into the motivations of the Flag Smashers and Sam himself. Ultimately, Sam and Karli are fighting the same fight, just in very different ways and on very different scales.

The Disney+ shows have demonstrated that well-written character moments are what make the MCU so compelling, and this encounter is another brilliant showcase of just that.

Aside from Sam and the Flag-Smashers, much of the episode was dedicated to John Walker. A man constantly being questioned in his role and subsequently pushed to the edge, Walker wrongly assumes that carrying the shield automatically gives you respect. This leads to the new Captain America's authority constantly being challenged, which wears him down at every obstacle.

And who could blame him? Living up to the legacy of Steve Rogers is tough, and it is incredibly interesting to see a version of the Star-Spangled Man that isn't quite ready for the task ahead of him.

One of the best showcases of this was the talk between John Walker and Lemar Hoskins in a café, which conveyed how Walker was truly conflicted about his decision over the serum. To Walker, the serum is what made Captain America who he was. What he needs to realize though is that Steve Rogers was never "a perfect soldier, but a good man.”

Hoskins was the only thing keeping him grounded, which made it all the more saddening when Battlestar met a cruel fate at the hands of Karli Morgenthau. MCU deaths are often presented as larger than life with a lot of fire and smoke, but Hoskins felt much more grounded and raw. Now suped up with serum, John Walker took his rage over his fallen comrade out on the first Flag Smasher he could get his hands on.

With an absolutely brutal kill, Walker bloodied the shield and tarnished the legacy that Sam and Bucky are fighting so hard to protect. The entire sequence was incredible to see unfold, culminating in the chilling image of John Walker with blood on his hands (among other places).

"The Whole World is Watching" was a gripping watch from start to finish, building up Walker's downfall as the show goes into its final act.

The Winter Soldier himself got some time to shine in "The Whole World is Watching," with Sebastian Stan being given the room for an incredibly emotional start to the episode. Marvel's Disney+ releases have really allowed their actors to, well, act, and The Falcon and the Winter Soldier is no different.

Wyatt Russell was undeniably the standout though, having to juggle a whole host of emotions throughout the events of the episode. With Walker repeatedly having to prove himself and getting upended at every turn, Russell has to play confident, cocky, cruel, culpable and capable of showing a little bit of fragility. And he nails each and every one of them.

A glimmer of Walker's weakness was seen following his defeat at the hands of the Dora Milaje, where he hopelessly lamented that "they weren't even super soldiers." While Walker is all abrasive bravado most of the time, Russell manages to perfectly portray the insecurity and doubt that lies deep down.

So far, Wyatt Russell has done an excellent job playing a character that everyone loves to hate, and this hatred will only get stronger as John Walker descends further into supervillainy.

After only having brief appearances in previous MCU flicks, Florence Kasumba finally had the chance to flex her acting chops as Ayo. Kasumba brought more of the character's blunt attitude previously seen in Captain America: Civil War, but the actress also presented a tenderness to the Wakandan that was previously unseen.

That said, Ayo isn't out of badass lines just yet. Living up to the now iconic "Move, or you will be moved" quote is certainly a challenge, but "The Dora Milaje have jurisdiction wherever the Dora Milaje find themselves to be" definitely comes close. Hopefully this isn't the last time we see Ayo in the series, as Kasumba is a perfect addition to the already stacked cast.

Big surprise, The Falcon and the Winter Soldier continues to look, sound, and feel fantastic. Everything still looks top-notch, with the Disney money going a long way to amplify the violent brutality atypical of a typical MCU adventure.

No scene exemplifies this more than the skirmish between John Walker and the Dora Milaje, with the choreography and minimal use of CGI being on point. Punches are being thrown constantly as are spears left and right, making the entire sequence fast, frenetic, and fun.

The violence wasn't just isolated to the action itself though, as it was also implied through masterful prop work at the end of the episode. While the MCU can't go full gore-fest, Marvel Studios were able to imply the savagery of Walker's actions simply through a bloodied shield.

Another special shout out has to go to John Walker's beard. As the series has progressed, the character has slowly grown out his facial hair, with his unkemptness being symbolic of his declining mental state. Attention to detail is the name of the game in the MCU, and the costume and makeup department have not disappointed in this regard.

Where would the MCU be without its interconnectivity? It certainly wouldn't be here, because The Falcon and the Winter Soldier brings together a plethora of elements from various corners of the MCU while featuring Easter eggs and references galore.

Wakanda was the big inclusion in "Episode 4," setting the entire opening in the Vibranium-fueled nation. With the country now fully out in the open, it's nice to see that Wakandan presence is being maintained outside the expected solo projects. As mentioned previously, the emotional effects of Bucky's deprogramming were seen right out of the gate, filling in more of the gaps between Captain America: Civil War and the White Wolf's appearance in Avengers: Infinity War.

Falcon's experience helping soldiers with PTSD came into play, which was a skill that he mentioned back in Captain America: The Winter Soldier. The Falcon and the Winter Soldier seems to be continuously suggesting that a person's heart makes the hero, not their powers. It is reassuring to see Marvel Studios has ensured that a trait from Sam Wilson's first appearance has stayed with him all this time, and his empathy and care for others should do him well in the long run.

The end of the episode, when John Walker smashes the ever-living daylights out of a Flag Smasher, seems to be a parallel to the fight between Cap and Iron Man in Captain America: Civil War. Whereas Steve uses his shield to shut down Tony's suit and deescalate the fight, Walker isn't afraid to let his rage get the better of him.

Week-to-week, The Falcon and the Winter Soldier has been consistently great. "Episode 4" continues that trend. While it may have been a bit slower than prior episodes, "The Whole World is Watching" did wonders for John Walker and absolutely delivered on giving the character a satisfying yet terrifying arc.

Who knows where it goes from here. There are a lot of potential villains on the table, including Zemo, John Walker, the Flag Smashers, and the Power Broker. The threats are mounting for Sam and Bucky, so it will be interesting to see who they will face and how they will take the down when the time comes.

The expected route for John Walker is that he'll devolve more into an evil Captain America, but what if he doesn't? The show has established that Walker isn't all bad, so perhaps there is a possibility of subverting his arc but having him realize that he is way in over his head.

Either way, The Falcon and the Winter Soldier will undoubtedly continue its hot streak and lead into a third act to remember with its last two episodes.