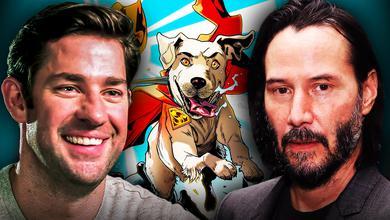 Back in 2018, it was announced that The LEGO Batman Movie writer Jared Stern had signed on to write and direct a Super-Pets film for DC.

After a long wait with minimal news, it appears production on the animated team-up film is finally picking up steam with Dwayne Johnston signed on to lead the film.

With the release date set for just under a year on May 20, 2022, DC has finally announced a cast of A-list actors who will be joining The Rock to voice the super-powered team of pets.

With the cameras already rolling on Dwayne Johnston's Black Adam, the actor is preparing to take on another DC role as he leads the cast of DC's League of Super-Pets.

The actor revealed a new teaser video that confirms he will play Krypto the Super Dog in the film while his frequent co-star, Kevin Hart, will join him as Ace the Bat-Hound.

League of Super-Pets will be produced collaboratively by DC Comics and The Rock's own studio, Seven Bucks Productions, with the release date set for May 20, 2022.

WHEN CAN SUPERPETS FANS EXPECT A TRAILER?

There's just under a year to go until the release of The League of Super-Pets, which likely means there is still time to go before the first full trailer drops online. Given the second DC FanDome is set to take place this October filled with plenty of announcements and reveals, that event would be a logical place for Warner Bros. to show off the Super-Pets in action for the first time.

With The Rock already leading the live-action Black Adam solo film which will release in July 2022, it's safe to say the legendary body-building actor will have a substantial presence at the October event.

Much like last year, DC FanDome is expected to be an online-only event with panels, trailers, and more streamed to the entire world.

While the teaser released as a part of the cast announcement was brief, it did offer the first look at the film's 3D computer-animated style which has been created by Animal Logic. In the past, the studio has leaned toward animation on a multitude of major films like The LEGO Batman Movie and Happy Feet, however, they also have complete visual effects work on several MCU projects.