While She-Hulk: Attorney at Law was, as Jennifer Walters pointed out, She-Hulk's show, the Disney+ series introduced audiences to an impressive number of comic book characters.

Now that She-Hulk's finale has come and gone, fans are learning more about how the show evolved from pitch to screen, as well as which Marvel Comics characters were scrapped along the way.

Newly revealed concept art for She-Hulk: Attorney at Law has shown that Bushwacker, a Daredevil villain, was cut from the Disney+ series early in development.

In the comics, Bushwacker's actual name was Carl Burbank, a former priest who joined the C.I.A., gained a cybernetic arm, and became an assassin. 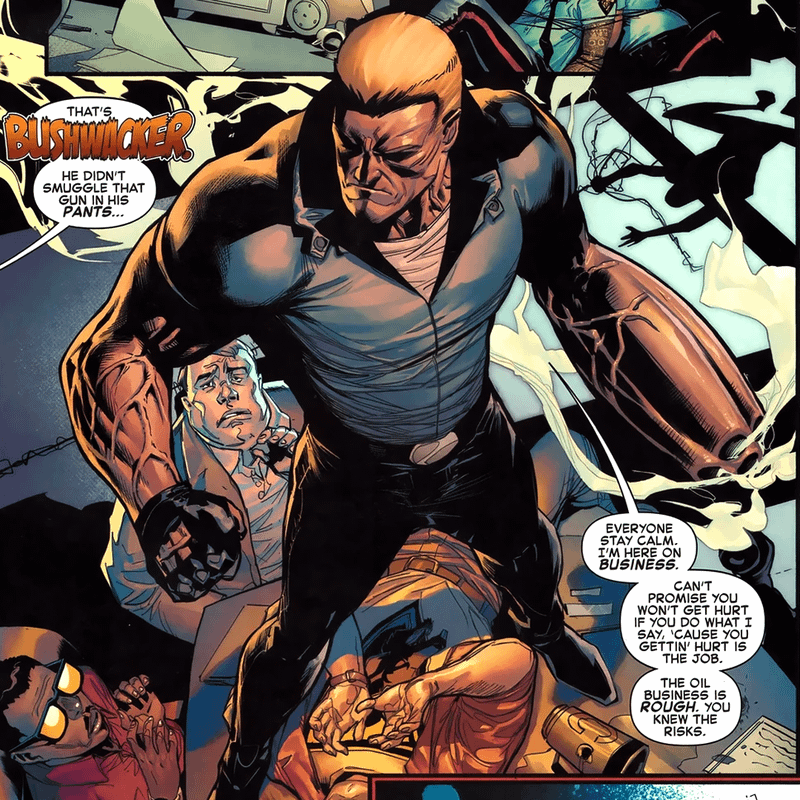 Due to his modified skin, Bushwacker's arms were capable of transforming into various weapons ranging from swords to guns and even a flamethrower.

How did he load these weapons? Simple. By swallowing bullets and even fuel.

Daredevil and Bushwacker crossed paths multiple times in the comics, with the first being when he and Wolverine teamed up to stop the villain, resulting in his face being scarred and him being taken into police custody.

On Instagram, concept artist Wesley Burt shared his She-Hulk design for Bushwacker, who has actual weapons for arms in the style of Razor Fist instead of that malleable, transformative skin from the comics.

The concept art also shows prosthetic hands hanging at his sides, with a red, white, and blue-colored hand labeled as the Patriot edition.

Concept artist Jeff Simpson posted a very different vision for Bushwacker on Twitter, noting that this was a "modern take" on the character complete with a "streamer/influencer vibe:"

"A weird one - a character Bushwacker was going to show up but I believe it was cut early on. In the comics he has a … flesh gun which sounds as nasty as you’d imagine so… This was a modern take on it - guns for hands, more of a streamer/influencer vibe vibe going on"

In keeping with Simpson's Bushwacker being a gamer/streamer personality, the artist's concepts for the villain's weapons are equally evocative of that from a video game.

Bushwacker wasn't the only villain cut from She-Hulk: Attorney at Law.

The one who many fans theorized was pulling the strings of Inteligencia, Tim Blake Nelson's The Leader, was, in fact, part of the show's original pitch. But even though he was cut from She-Hulk, he will be in Captain America: New World Order.

As to whether Bushwacker will also have a second chance at life in the MCU remains to be seen. But for now, it is fascinating to be shown how two different artists adapted this character from the comics in two completely different ways.

Not only was the design of Wesley Burt's Bushwacker reminiscent of his comic book look, but it also echoed what fans are already familiar with in the MCU.

In addition to his parallels to Razor Fist, his metal hand prosthetics are equally similar to Bucky Barnes' Vibranium arm.

His Patriot edition hand is particularly intriguing. While it could be a callback to his C.I.A. background, it could also be a connection to The Falcon and the Winter Soldier and Captain America 4 storylines.

Was he also scrapped from She-Hulk for a New World Order role? Only time will tell.

Meanwhile, Jeff Simpson's idea for Bushwacker is a huge departure from the comics but much more relevant to our modern day.

If this Bushwacker hadn't been scrapped, the name Bushwacker probably would've been a gamer tag. And, instead of C.I.A. training, his assassin skills could've stemmed from his proficiency in shooter-style games.

While the comic book baddie is a Daredevil antagonist, this updated spin could have easily fit with She-Hulk's commentary on influencers and social media.

But again, just because audiences didn't see Bushwacker in Attorney at Law, that doesn't mean he won't be used in a different project.

He is a Daredevil villain after all. And, with Daredevil: Born Again on the horizon, it's possible that one of these versions - or a new version altogether - will one day make the jump into the MCU.

All episodes of She-Hulk: Attorney at Law are available to stream on Disney+.