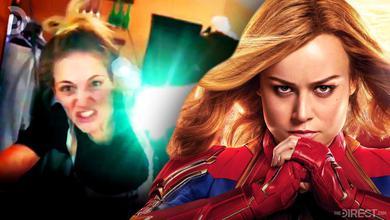 Captain Marvel made history last year by being the first female-led solo movie of the Marvel Cinematic Universe. On top of that, the 2019 blockbuster also joined the billion-dollar club in terms of box office returns. As a result, the success of Captain Marvel led to a sequel being green-lit, with the film scheduled to release on July 8, 2022.

The debut film of Carol Danvers in the MCU further opened up the cosmic branch of the MCU as it paved the way for the introduction of major figures such as the Skrulls and the Supreme Intelligence. Not only that, the powerful abilities and skill set of Danvers were also front and center, ultimately raising the bar of power levels among heroes in the MCU.

Even though Captain Marvel successfully highlighted the sheer physical power of Danvers, it seems that an unused action concept from the film may have given more emphasis on the heroine's abilities.

Joanna Bennett, one of Brie Larson's stunt double, released a video on Instagram showing her performing an unused action concept from 2019's Captain Marvel. The two-minute reel video showed Bennett in various stunts which features the fighting skills of Carol Danvers from the film:

The reel video that was shared by Bennett is a perfect example of the character's fighting prowess, with it showing the heroine having her way against cosmic beings. Given that this is an unused action concept from the film, there's always a chance that some of these stunts will be used in a future MCU film.

At this point, Carol Danvers is one of the most powerful heroes in the MCU. However, many would agree that Captain Marvel only touched the surface when it comes to showing Danvers' potential. Meanwhile, the heroine's power levels were front and center during the final battle of Avengers: Endgame, but it left fans wanting more of the character due to the limited screen time of the MCU hero.

Thankfully, it has already been confirmed that Danvers will lead the future of the MCU, and the possibilities are endless for the character moving forward. Hopefully, more similar action concepts will be incorporated in Captain Marvel 2 which could further elevate the character to greater heights.