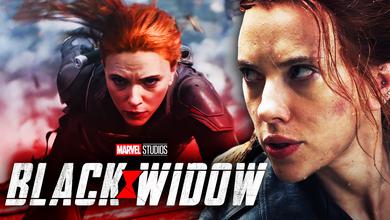 Black Widow seems to have revealed every last detail it can prior to its upcoming release next year, as a result of continual delays to its release date. While one of Disney's stakeholders was urging for a Disney+ release, the Marvel film is set to maintain a theatrical release on May 7, 2021.

Comic book tie-in covers were one of many pieces of promotional material to fall victim to Black Widow's delay, which featured new artwork based on the film. While new information from official sources seems to have run dry, a rumor may hint at an exciting, spoiler-filled cameo in the upcoming film.

A new image was recently released by Marie Claire, depicting Natasha Romanoff and Yelena Belova together on a motorcycle. Scarlett Johansson spoke to the outlet, sharing her reaction to Black Widow's ever-shifting release date...

In an interview with Marie Claire, Scarlett Johansson shared her thoughts on the ongoing delays surrounding Black Widow. The actress stated that her and fellow Marvel producers want to release the film, but noted that audience safety is of the utmost importance:

"I'd been talking to Kevin Feige about it, and our fellow producers, just trying to understand what the landscape was...We're all eager to get the movie out, but more important than anything, everybody wants the experience to feel safe, to have people be able to really feel confident about sitting in an enclosed theater."

From Scarlett Johansson's statement, it appears that Marvel Studios and Disney are prioritizing the safety of moviegoers. While a large part of this decision will be money-motivated, it is at least reassuring that the studio is not trying to rush the film out to make a quick, albeit lower-than-usual, return.

Johansson's reference to theaters also largely negates the prospect of a Disney+ release. Many believed that Marvel Studios would opt to shift the film over to the streaming service, though previous experiment Mulan appears to have underperformed against a staggeringly large production and marketing budget, which may have influenced this decision.

Disney seems to be testing the waters with the platform by releasing Pixar's Soul on December 25, 2020, without additional costs. As Pixar has yet to have one of its non-sequel films surpass 1 billion dollars at the box-office, Soul is a much safer bet for testing out on Disney+ than a much anticipated Marvel film. If Soul proves to be a success, this could lead to future MCU films appearing on Disney+.

Despite this, it seems that Black Widow will stay on course for a theatrical release date on May 7, 2021.