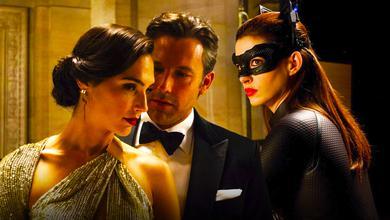 In the months leading up to the March 18 release of Zack Snyder's Justice League on HBO Max, fans have learned from teasers, trailers, and the director himself that his cut includes characters that audiences didn't see on screen in 2017's Justice League.

For many, one of the most surprising is the return of Jared Leto's Joker, who appears to be sporting a whole new style for this version of the story.

But it seems Snyder has also considered how DCEU characters that audiences won't be seeing in his 4-hour cut have managed to influence his cast of heroes and villains.

In an interview with SnyderCutBR, Zack Snyder was asked to clarify claims that he once said Ben Affleck's Batman had been married Selina Kyle's Catwoman.

The director responded by saying:

“...I need to look at those words I said about Selina Kyle because I'm not 100% sure if that's correct or not. ...I've heard someone say that to me before, and I'm like 'Man, maybe I just misspoke or I was misinterpreted,' but that doesn't fit correctly in what I... If I did, I apologize because I don't think Bruce and Selina were married.”

In addition to being asked about his prior comments about Batman's marriage, the director also talked about his take on Dick Grayson's Robin being murdered by the Joker and how that contributed to the “bitterness” of the character played by Ben Affleck in 2016's Batman v Superman.

Snyder said, “I think his relationship to Joker is probably, I think, is a big part of his arc... What happened to Robin and that whole chapter of his life, I think, is an important part of his — what's made him who he is.”

Snyder then revisited his thoughts on Wayne's relationship with Kyle stating,

“I do believe there was a relationship with Selina Kyle. And I do believe that it's as close as he's gotten to a real kind of relationship in the sense of someone that he had an affinity with. But I think they were both too broken to ever be married or to have a relationship that was based on what we would call traditional. Sort of the values of marriage and things of that nature...”

Along with the gadgets and fate of Gotham, the Batman carries a lot of emotional baggage — a theme that has often been explored in retellings and retoolings of the Caped Crusader.

In recent years, writers and directors have focused on Bruce Wayne having been shaped by the loss of his parents. Therefore, Snyder's interpretation of how loss from the character's adult life has shaped him is somewhat of a new perspective and differentiates Ben Affleck's Batman from Batmen before him.

THE FUTURE OF CATWOMAN AND BATMAN IN THE DCEU

Snyder has touched on the subject of Batman and Catwoman several times before. In an interview from November 2020, the director approved fan-casting Carla Gugino as Catwoman and theorized she and Batman would've had a history that they would rekindle after he retired.

Clearly, the director considers the backstory of his characters in his plots, even if that history is never explored on film. However, now that Snyder's time with the DCEU is drawing to a close, Batman's relationship with Catwoman is falling to the next Batman film in the pipeline.

Matt Reeves' The Batman, starring Robert Pattinson, continues to aim for a March 2022 release to tell the tale of a younger Dark Knight with an emphasis on the character's detective skills. The film also includes Zoë Kravitz as the new Selina Kyle.

Even though extent of Kyle and Wayne's relationship in this upcoming film is yet to be seen, it's clear the story between Batman and Catwoman is far from over.