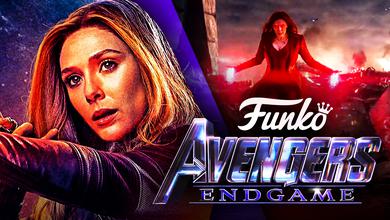 It’s now been more than two years since Avengers: Endgame’s release, yet its continued impact on the MCU makes it feel like it was yesterday.

Recently-released Marvel projects like WandaVision and The Falcon and the Winter Soldier were heavily focused on the aftermath of Avengers 3 & 4. For example, the former was all about Wanda Maximoff’s seemingly never-ending grief as she had to come to terms with losing Vision. It was incredibly well done, touching on many key points that really helped flesh out the character that would become the Scarlet Witch.

But the first time fans truly saw Wanda deal with losing Vision was just shortly after she witnessed it. It may have been five years since it happened to those who survived Thanos' Infinity Snap, but for Wanda, she saw Vision die just before she was blipped away. So when she returned at the end of Avengers: Endgame, only mere minutes had passed for Wanda since she had lost the love of her life.

Now, it seems Marvel would like to remind fans of this moment with a new piece of merchandise that highlights Wanda’s display of strength following yet another tragic loss in her life.

According to a recent leak posted by @abbernaffy_customs on Instagram, an image has surfaced of a new Avengers: Endgame-inspired Funko Pop! for Wanda Maximoff, showcasing her might that she put on display against Thanos in the film’s final battle sequence.

Wanda was the only Avenger that Thanos truly showed any fear towards, and now it seems that fans will finally get to take a piece of that home with them as the moment will be immortalized as one of Funko’s many three-inch figures for the franchise.

Last November, Funko-retailer Pop In A Box teased that they had a piece of concept art for a new Wanda Maximoff figurine, stating that it would release in 2021. However, all they were willing to show of the artwork was Wanda’s red-glowing hand:

It now looks as though that concept art was used to create an Endgame figure for Wanda, as the same glowing hand design can be seen on the box art of the supposed Wanda Maximoff Pop! in the leaked photo.

When the retailer teased the production of this figure, there had never been a Wanda Maximoff Funko Pop! that showed off her power set in any sense, so this tease stirred up quite a bit of excitement as fans were eager to get a Wanda figure that included more than just another basic pose. Of course, this isn't the case anymore following the incredible line of Funko figures released for WandaVision, but it's still exciting to see that Wanda's big Endgame moment against the Mad Titan will be made into a collectible.

It makes sense that Funko would wait until after the release of Avengers: Endgame to distribute this spoilery figure for Wanda, as they did for many other figures such as the Tony/Morgan Stark 2-pack that didn’t release until last fall. But now more than two years after the film’s debut, it's a bit strange that Funko is still holding off on the release of some of the film’s merchandise.

This may be because of the delayed release of WandaVision that would have conflicted with this figure's release, or Marvel may just be milking Endgame’s abundance of success for just a little longer. But in the grand scheme of things, it shouldn't be taken as too odd when accounting for all the other Marvel merch that's still being pushed out in Endgame's honor.

Nevertheless, it’s more than exciting to see that Wanda Maximoff will take the Funko spotlight once again, this time encapsulating just how powerful she is as she was able to go head-to-head with Thanos himself — and almost took him out, too.