The Mandalorian stunned with its spectacular visual effects, making use of innovative technology such as ILM Stagecraft and Unreal Engine to create its worlds.

The series will continue to use this technology going forward, with showrunner Jon Favreau saying it allows the production to be "much more contained." Some of these efforts have already been seen in the recent release of the trailer for The Mandalorian season 2, which matches the same level of production quality seen in the prior season.

The sequel trilogy has mostly opted for the use of CGI to create its many ships and starfighters, but The Mandalorian brought it back to basics by using physical miniature models. This includes Din Djarin's own ship, The Razor Crest, which returns in the new trailer for the upcoming season of The Mandalorian.

Star Wars has now gone in-depth about the process of creating the Razor Crest for the small screen...

Star Wars released a mini-documentary about the making of The Mandalorian's ship, The Razor Crest, using model-making to bring the ship to life in the series. Directed by Chris Hawkinson, the documentary details ILM's commitment to using miniatures in spite of the rise of CGI. On this, Hawkinson said:

“Miniatures and motion control are in our DNA at ILM, and it’s been over 15 years since we have done a motion-control shoot...Documenting the process wouldn’t have been possible without the support of the company and filmmakers..."

Hawkinson also recalled the process of making the documentary in order to properly chronicle the behind-the-scenes process of creating the Razor Crest:

“We spent just over two months gathering interviews and shooting behind-the-scenes footage and finished post production during shelter-in-place...From the design of the ship, to the engineering the motion-control rig and model mover, to the incredible level of detail in the miniature, to the passion everyone brought to the project… It’s movie magic. It’s what inspired me growing up, and helping tell the story was one of the greatest joys of my career.”

The announcement of this documentary was accompanied by a few behind-the-scenes pictures of the process.

The Razor Crest model is seen placed on a rig.

The ship is seen here in front of a blue screen, allowing it to be composited into the final shots of the show. 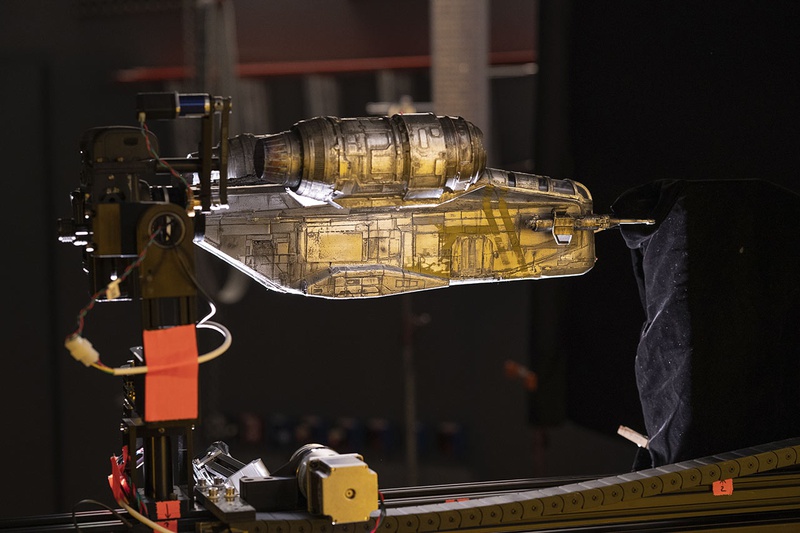 Despite its size, the miniature version of the ship still possesses an impressive amount of detail even prior to additional CGI.

You can watch the mini documentary below:

The documentary takes fans through the ideation and inception of the Razor Crest as a ship that "predates the X-Wings" right through to the creation of the physical model itself.

It also discusses some of the limitations of the use of miniatures in comparison to the freedom allowed by CGI. This includes having to surround the miniature with reflective screens in order to achieve the proper reflections on the ship's exterior. This was used in two shots where the Razor Crest is flying over desert during the daytime, which was able to be done on a soundstage, despite the difficulty it proved.

The documentary should prove to be a fascinating watch for fans of The Mandalorian and filmmaking alike, demonstrating what goes into the production of these shows and the challenges that have to be overcome to make a series look as good as it does.

The Razor Crest will return when The Mandalorian season 2 premieres on October 30 on Disney+.