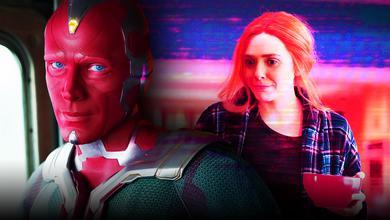 WandaVision returns for its seventh episode of the season, delving into the Modern Family/The Office era of television.

The big reveal of the episode was that nosy neighbor Agnes was masquerading as the nefarious Agatha Harkness all along, bringing a sinister, yet catchy, musical number with her. The Disney+ series seemed to have been hinting towards this possibility throughout its run, but audiences now have solid confirmation on whom the big bad of the season truly is.

One of the lingering questions from "Breaking the Fourth Wall" was the identity of Monica Rambeau's aerospace engineer, who still remains a mystery. Teyonah Parris teased that it would cause big reactions when the information is finally disclosed, priming fans for the inevitable surprise.

New stills have been released from the Disney+ series, demonstrating how WandaVision has tackled the sitcoms of the mid-to-late 2000s...

Disney has released five new stills from "Episode 7" of WandaVision, showing several characters and moments from "Breaking the Fourth Wall."

The images can be seen below:

Wanda holds a bowl of cereal, clearly trying her best to keep her composure.

Tommy and Billy Maximoff try to enjoy some video games before their Wii Remote controllers are transformed into other objects.

Vision "Jim"s the camera in this next still, a reference to how characters from The Office would stare into the camera for comedic effect.

Monica Rambeau's S.W.O.R.D. vehicle races towards the walls of the Hex, determined to break through.

In the final image, Wanda stares at a milk carton, confused as to why it keeps shifting its appearance.

WANDA AND VISION ADDRESS THE AUDIENCE

WandaVision has been reveling in the various sitcom eras that it has covered thus far, and "Episode 7" is no different. From characters looking into the camera to talking with production crews between shots, "Breaking the Fourth Wall" was a love letter to the sitcoms that it was borrowing from. Even the theme song had The Office vibes to it, featuring motifs very similar to that of Dunder Mifflin's own musical tones.

These images directly reference how Wanda's reality seems to be crumbling, with various objects changing their form throughout the episode. While it has yet to be confirmed what exactly is going on, there are a few likely possibilities.

With Agatha Harkness's reveal, the warping items could be a means to mess with Wanda Maximoff further. Alternatively, the objects transforming could reflect Wanda's mental state, being unable to cope with maintaining her surroundings.

It will be interesting to see how WandaVision continues and whether the sitcom format will be dropped entirely. It does seem that the show will go full Marvel Studios-blockbuster from here on out, but it would be nice to get a few more winks and nods to the television roots that have driven the show thus far.