Each of the 23 Marvel Cinematic Universe films and ultimately any work inspired by a novelization is rightfully called an "adaptation". But within the MCU, there have been iconic moments that are taken directly from the comics themselves and played out on screen, and those rare occasions have been memorable . Some may call it "fan service", but the creative minds of the MCU bring these comic moments to life in order to fully tap into the essence of the source material.

There is no stone left unturned when MCU fanatics scour for even the most obscure easter egg . In this feature from The Direct, we are spotlighting the top ten scenes from the MCU taken straight from the comics. These moments were more than just an easter egg to eagle-eye fans, they were the comics themselves brought to life.

2018's Black Panther made history at the box office alongside numerous accolades. Director Ryan Coogler found inspiration after looking deep into Black Panther's literary history, and one of the films' iconic moments is a call back to its comic roots. Having bested Black Panther in hand-to-hand combat, Erik Killmonger, aka N'Jadaka, tosses T'Challa off a waterfall. The scene wasn't just visually impressive, it was comic accurate. Killmonger bested T'Challa in the exact same manner in his first comic appearance: "Panther's Rage" in Black Panther Vol. 2 No. 6. 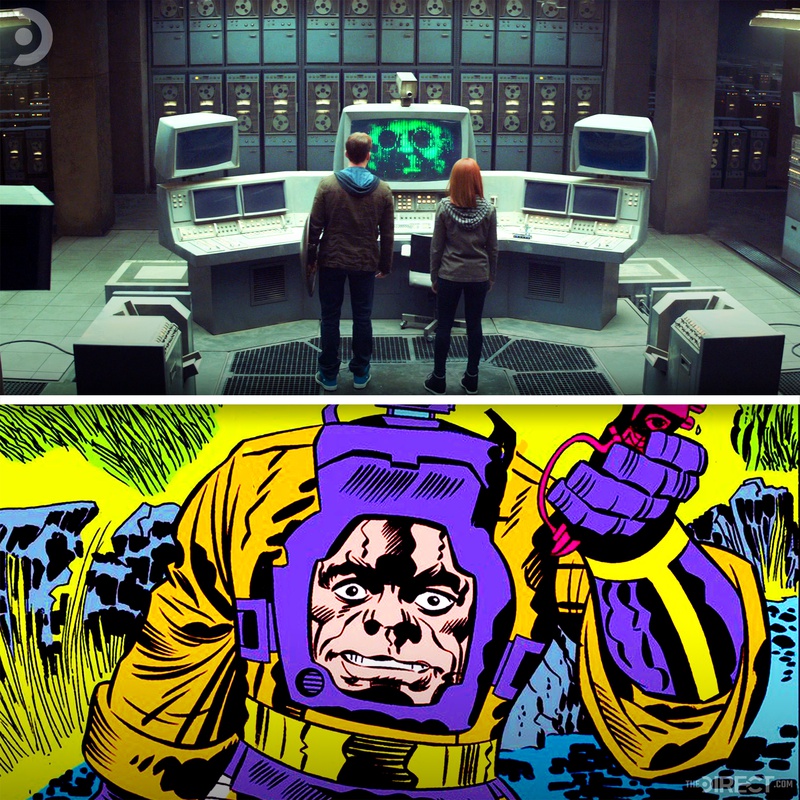 Captain America: The Winter Soldier is among the MCU's best films to date, placing a superhero adventure in a more grounded setting, set to the backdrop of a political thriller. After S.H.I.E.L.D has been compromised, Cap and Black Widow identify Hydra at the root of the matter, with Arnim Zola still very much alive, filling the void of the Red Skull. Well, somewhat alive, as after a terminal diagnosis, he has managed to transfer his consciousness into a database, helping Hydra feed crisis and initiate war, with the Winter Soldier at his disposal. Cap and Natasha can only watch in shock as Zola's details Hydra's plans in his computer form, a close nod to his evolved appearance in the comics. 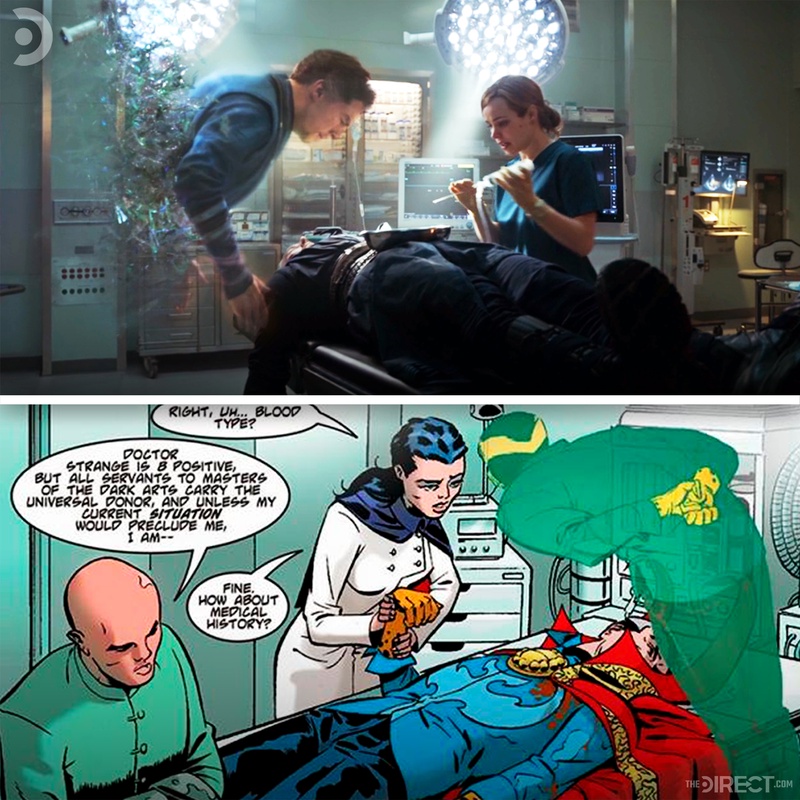 "Forget everything you think you know." Stephen Strange believed we were just beings made of matter, living in one sole reality. That was before his teachings in the mystic arts, opening up the discovery of different dimensions like the 'astral plane.' In his 2016 origin film, we see Doctor Strange use his newfound ability to aid Christine Palmer in performing surgery on...himself. Yes, Strange using his astral form in aiding Christine is a homage to a similar scene in the comics storyline "The Oath," where Strange assists a nurse tending to his physical body also through the use of his astral form. 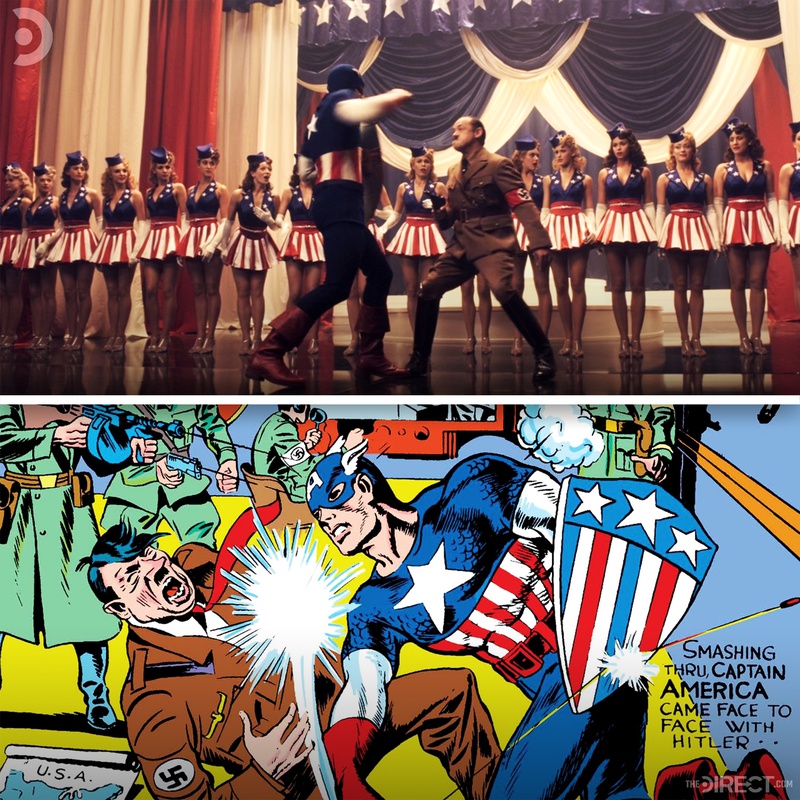 Marvel Studios reached way back for this easter egg, but perhaps it was fitting given that Captain America: The First Avenger details Steve Rogers' rise to the greatest soldier in history, set during World War II. Before seeing real action, Captain America has a more important job: selling war bonds! And what better way to promote than by witnessing Cap smack Hitler right in the face. The scene in the 2011 film is a recreation of the cover for the 1941 Captain America issue No.1, written by the great Joe Simon and Jack Kirby. The scene featured the classic Cap costume, from his original shield down to those stylish red boots. 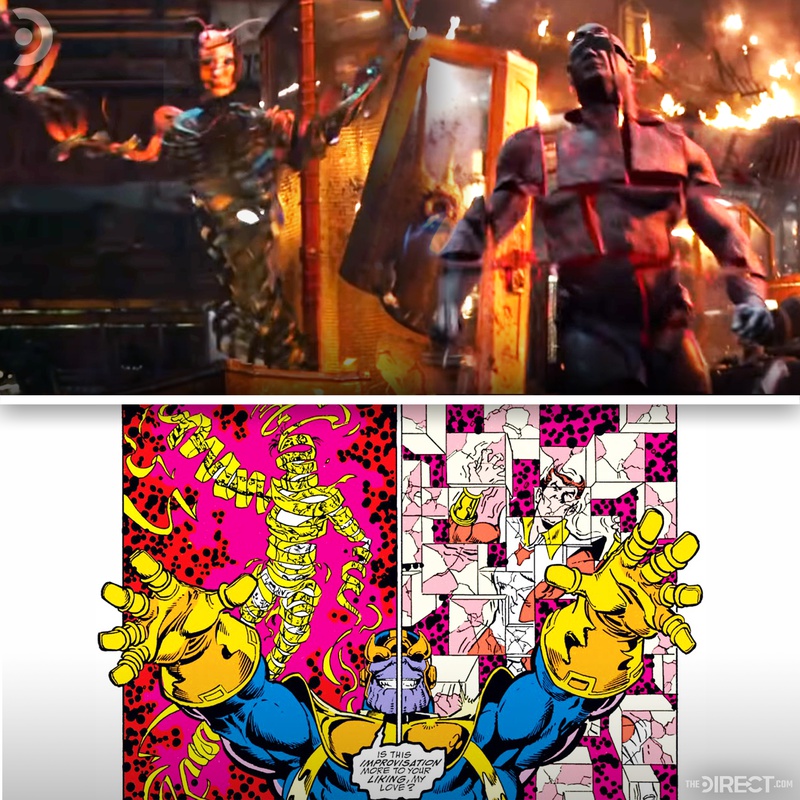 Throughout Avengers: Infinity War we witness the power of the Infinity Stones one-by-one, unfortunately at the expense of Earth's Mightiest Heroes. When Thanos reveals to have already retrieved the Reality Stone on Knowhere, we see the power he wields as he dices Drax into cubes and unravels Mantis like a thread, only for them to regain form later. The Mad Titan accomplishes this in the original Infinity Gauntlet comic book as well, rather as a means to impress Death. 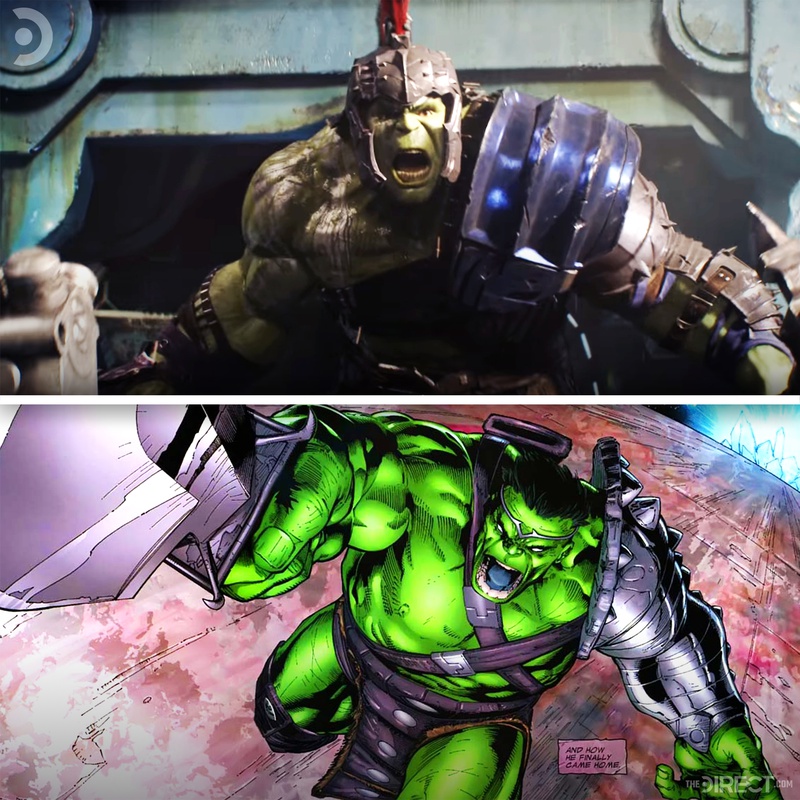 What do you get when you mix the God of Thunder with Led Zeppelin's "Immigrant Song?" You get a fan-favorite MCU film. Thor: Ragnarok is by far the best film of the trilogy, with its improvised humor combined with a thrilling soundtrack. But the icing on the cake was the inclusion of Hulk alongside the God of Thunder, and more specifically: Gladiator Hulk. The version from the fan-favorite Planet Hulk storyline was brought to life in Ragnarok, and his inclusion gave us one of the best fights pitting the two Avengers against each other. Plus, how can we forget that it gave us the hilarious line, "We know each other! He's a friend from work!" 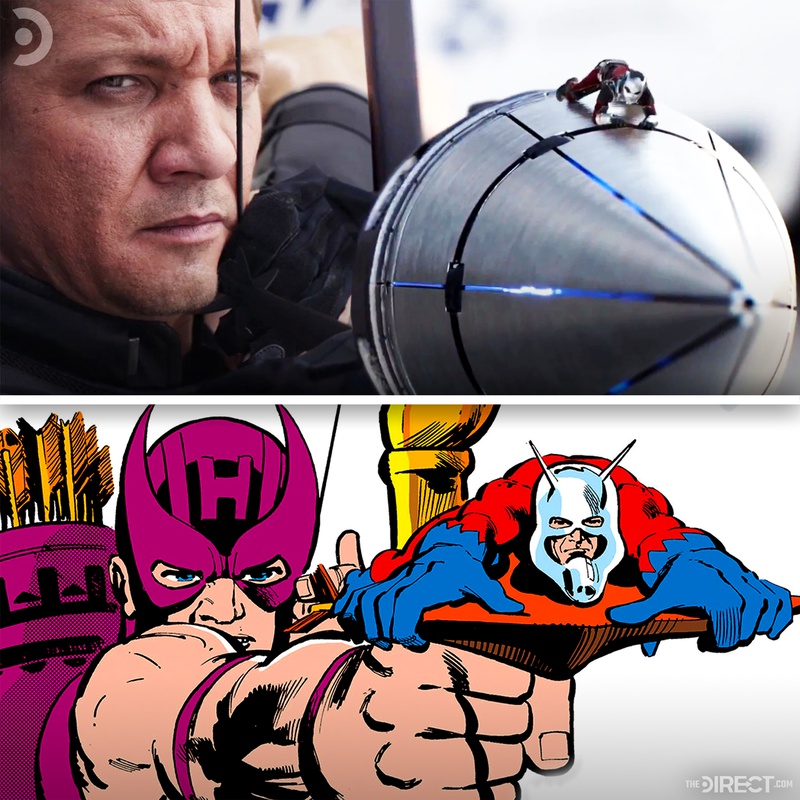 United We Stand, Divided We Fall. 2016's Captain America: Civil War provided us the debuts of Spider-Man and Black Panther, the first instance of Ant-Man becoming giant and an airport battle for the ages. In the latter scene, we also get one of the best nods to comics lore, when Ant-Man hitches a ride on Hawkeye's arrow en-route to sabotaging Iron Man's armor: "It's your conscious...we don't talk a lot these days". The shot is a perfect echo to the cover of Avengers #223. 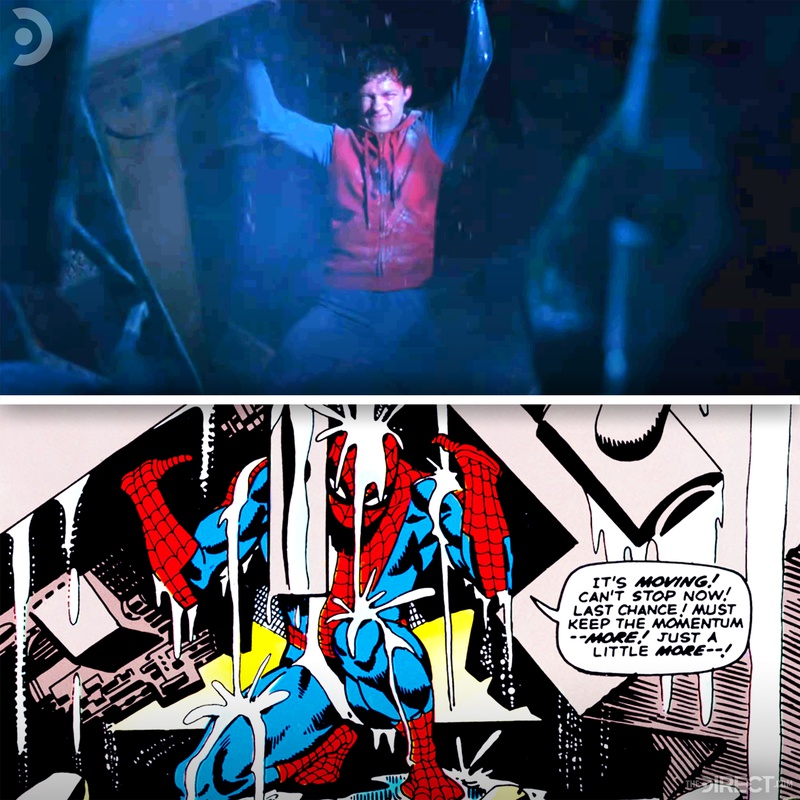 In Spider-Man: Homecoming many fans believe the MCU version hits the mark on the portrayal of not only the web-slinger but of the person wearing the suit. Perhaps the best embodiment of this comes in the film’s final act, with Spider-Man crushed underneath the rubble by the Vulture. Without his suit, we witness not just Spider-Man but also Peter Parker, the teenager from Queens, exhibiting the strength to free himself. The moment is even more symbolic given that it's a reference to the cover and opening pages of The Amazing Spider-Man Volume 1, #33. 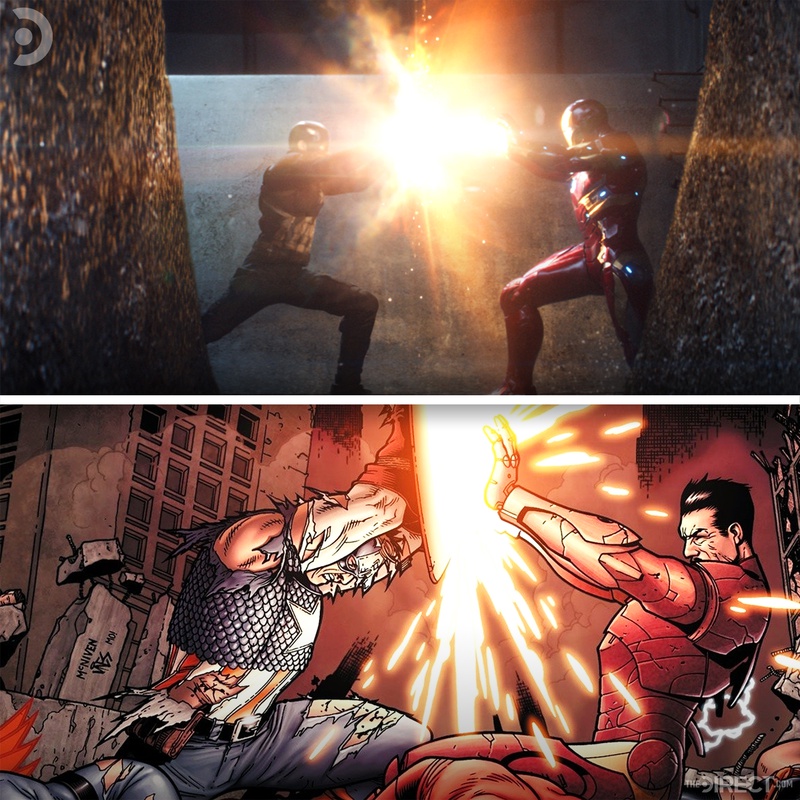 In the final act of Captain America: Civil War we witness a battle between the two heroes at the center of the conflict: Captain America and Iron Man. An immovable force versus and unstoppable object, we see this visualized as Cap’s shield faces Stark’s repulsor blast. This spectacular shot recreates the cover art of the Civil War comic storyline, bringing it to the big screen. For good measure, the Russo Brothers made sure to allow the shot to linger for more than a few seconds of enjoyment. 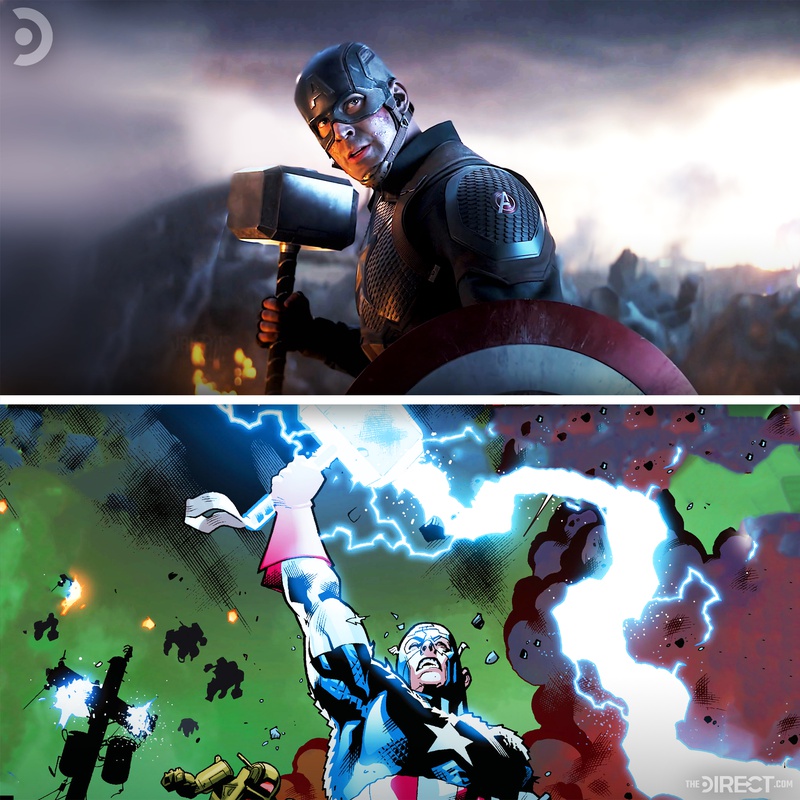 What makes Cap so special? Besides being a kid from Brooklyn, he is not solely a great soldier, but a good man (as Dr. Erksine notes in The First Avenger ). Naturally, he must be worthy of wielding Mjolnir, and according to the MCU creative heads, he was capable of doing so in Age of Ultron . Instead, fans had to wait until Endgame , and it’s safe to say it was worth the wait. It may have been his first instance of wielding the hammer in the MCU, but Cap has done so plenty of times in comics lore, with the earliest record being back in The Mighty Thor #390 (1966). 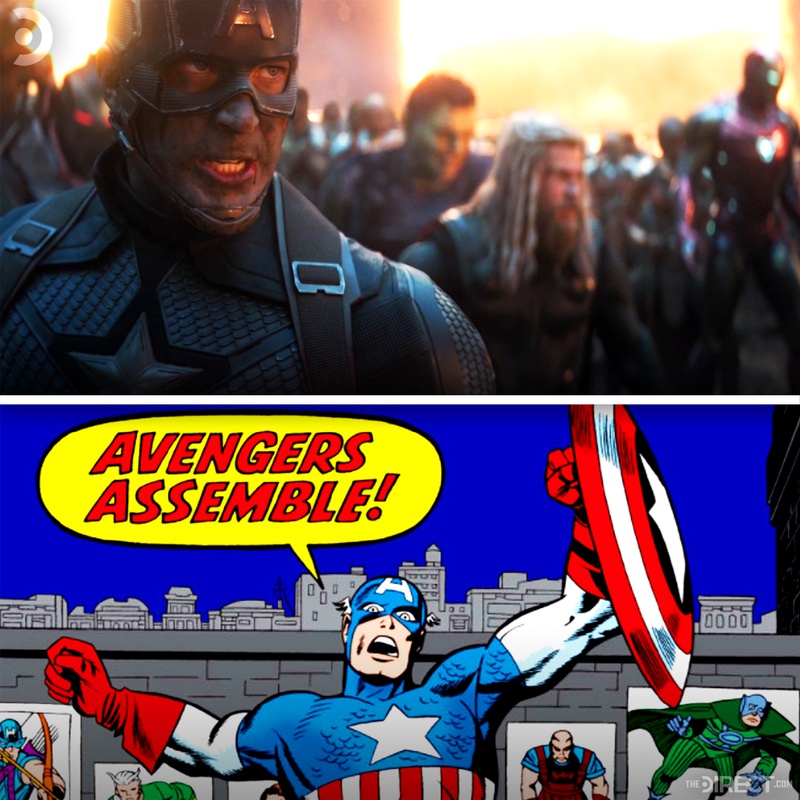 Is it a shock that this moment lands at the top of the list? Those two words had been teased since the end of Age of Ultron, but the phrase deserves the right time and setting. Having brought back our favorite heroes from the snap, uniting them together against the most powerful being in the universe, hearing Cap say the words made the 11-year journey worthwhile. We’ve read the phrase numerous times in the comics, but hearing “Avengers…Assemble!” on the screen just hits different.