Tom Hiddleston Teases Kang’s Reign of Destruction In the MCU 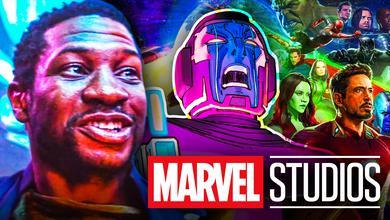 Tom Hiddleston sure has a following, one that was likely a key factor in sky-rocketing Loki's popularity and success. The show even broke records for Disney+, something that isn't new for Marvel's newly-released streaming ventures.

While WandaVision focused on the exploration of grief and The Falcon and the Winter Soldier in legacy, Loki's theme revolved around identity. In doing so, it introduced the concept of branch realities—and from them, Variants.

It's in Variants that audiences were introduced to Sylvie, a new Loki that was brought to life by Sophia Di Marino. She wasn't the only one, as viewers were gifted by the additional existence of Classic, Kid, and even Alligator Loki.

There's one character who these Variants in the MCU have not yet met. But they will, and as He Who Remains warns, they'll be a force to reckon with.

Within it, Tom Hiddleston and Jonathan Majors have a moment where they tease the future of He Who Remain's Variants.

The Variant(s) in question is none other than Kang the Conqueror, someone who Hiddleston says is "bent on destruction:"

"The Variant of He Who Remains, the one he's been talking about, the one he's so afraid of, is Kang. Kang is bent on destruction and I'm so curious to see what Jonathan does in the future."

When playing He Who Remains, Majors' main objective was to give himself "the largest canvas possible," providing him the largest range to bring Kang to life—a character who "has no choice but to be in opposition or be different from He Who Remains:"

"I think with He Who Remains, the objective for me was to give me the largest canvas possible. And from that, as Kang begins to rear his head and do his deeds, in so many ways, he has no choice but to be in opposition or be different from He Who Remains. That was the thing that grabbed me and pulled me into the role. The fact that Kang lives in so many iterations; as He Who Remains says, 'Reincarnation, baby.'"

Kang the Conqueror is one of the Avengers' biggest villains in the comics. Loki does a tremendous job at not only introducing him through his Variant to the audience but also successfully building up an intense sense of dread. Even Thanos would be a little nervous.

This is only the beginning of Jonathan Majors' time in the MCU, with his next official appearance set to debut in the upcoming Ant-Man and the Wasp: Quantumania. Not much is known of the film's plot, but there's no doubt it will be a wild ride.

As for after that? Well, there's no way that will be the end of Kang. While not official by any means, it seems a given that Majors will make an appearance in Loki's second season. Maybe he'll even play a key role in the formation of the Young Avengers.

Marvel Studios' Assembled Is now streaming on Disney+, and Ant-Man and the Wasp: Quantumania is set to hit theaters on February 17, 2023.