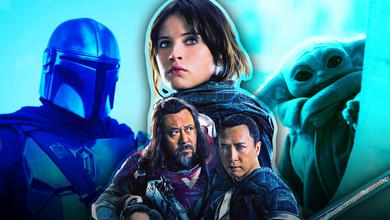 The premiere episode of The Mandalorian's second season, titled "Chapter 9: The Marshal," didn't just shatter Disney+ viewership records but also thrilled fans with a bounty of Easter Eggs and references to the larger Star Wars saga.

From what we can gather from new Mando merchandise, the series will continue to attempt to connect to other stories from that galaxy far, far away in upcoming episodes.

The featuring of the Tank Trooper in this Topps collection indicates viewers will see a Tank Trooper appear in Season 2 of The Mandalorian.

The appearance of Ahsoka Tano and Sabine Wren in this new season of The Mandalorian isn't a question of if, but rather when. Both characters were part of the cast of Star Wars Rebels, and the inclusion of a trooper from that series into this one would make sense, especially if Rebels creator Dave Filoni is at the helm.

In addition, with the upcoming Rogue One spinoff series about Cassian Andor in the works, the use of this trooper could be laying the connective groundwork for that series.

Regardless, bringing the variety of types of troopers into the series is another great way to tie into the larger Star Wars Universe; and it's also an indication that more action awaits Mando and The Child.