"A long time ago in a galaxy far, far away..." are the first words seen in every Star Wars saga film since the first one released back in 1977. Throughout the years, that galaxy has expanded in ways that fans couldn't have imagined all those years ago. The creator, George Lucas, was always focused on world-building throughout his work on the franchise and consistently motivated his crew to push the boundaries of their imagination. The prequels are a shining example of this, and since they bought Lucasfilm back in 2012, Disney has continued this philosophy throughout canon.

One of the biggest additions to the universe was Star Wars: Galaxy's Edge, located at both Disneyland in California and Orlando's Walt Disney World. This section of the popular theme parks completely immerses visitors into the Star Wars galaxy. Set on the planet of Batuu, the land has opened up many new opportunities for storytelling.

A new book titled Star Wars Galaxy's Edge: Traveler's Guide to Batuu treats readers as if they're residents of the Star Wars galaxy that are visiting the planet. It offers plenty of tips and recommendations for one's trip, but apparently that's not the only thing it possesses...

According to a Reddit post from u/IllusiveManJr on the channel r/StarWarsLeaks , the new book Star Wars Galaxy's Edge: Traveler's Guide to Batuu also contains an official galactic map of the Star Wars universe. The map's description focuses on Batuu's location "in the Western Reaches of the Outer Rim," and was a "bustling fueling stop for ships heading into Wild Space" before certain advancements in technology.

Presently, the planet serves as "a crossroads for adventurers and a haven for those who prefer life in the shadows." The map also includes a key to demonstrate the various sections of the galaxy, which can be seen below: 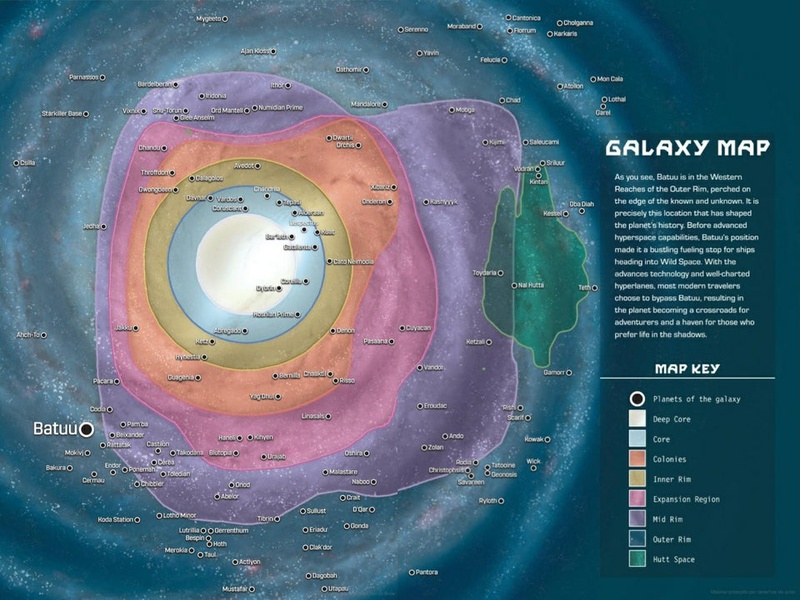 While this isn't the first map of the galaxy to come out during Disney's reign over Star Wars, it's always helpful to receive an update every now and then, as creators continue to add new worlds and species to the beloved franchise. One of the main reasons the saga became successful was because of its lived-in feel and the artist's attention to detail. There is rarely ever a moment when the audience feels like they're anywhere else but this galaxy far, far away.

If one were to look closely at the map, they would see several locations of many cherished worlds fans have seen throughout Star Wars, including Outer Rim planets like Mon Cala and Lothal, as well as a Core planet like Coruscant. This map perfectly illustrates the continuing desire from Lucasfilm to put as much care and thought into their work as Lucas did for so many years.