Spider-Man: No Way Home is the last Marvel project of the year and it's easily one of the biggest in some time. After breaking trailer records and crashing websites during ticket sales, it’s safe to say fans are excited for Tom Holland’s third Spider-Man film, particularly because it will see the return of some well-known faces from the web-slinger's big-screen history.

As has been revealed in trailers, Spider-Man: No Way Home will open the door to the Multiverse, which sees a number of foes from previous Spider-Man films invade the MCU. Many have speculated that the return of the villains from the Spider-Man and Amazing Spider-Man franchises will also bring the return of their heroes, played by Tobey Maguire and Andrew Garfield.

While Marvel and Sony have kept the potential inclusion of Maguire and Garfield in the film under wraps, that hasn’t stopped fans from creating their own posters featuring the trio of Spider-Men. Some theaters have even promoted No Way Home using these fan-made posters rather than using the official marketing for the film. 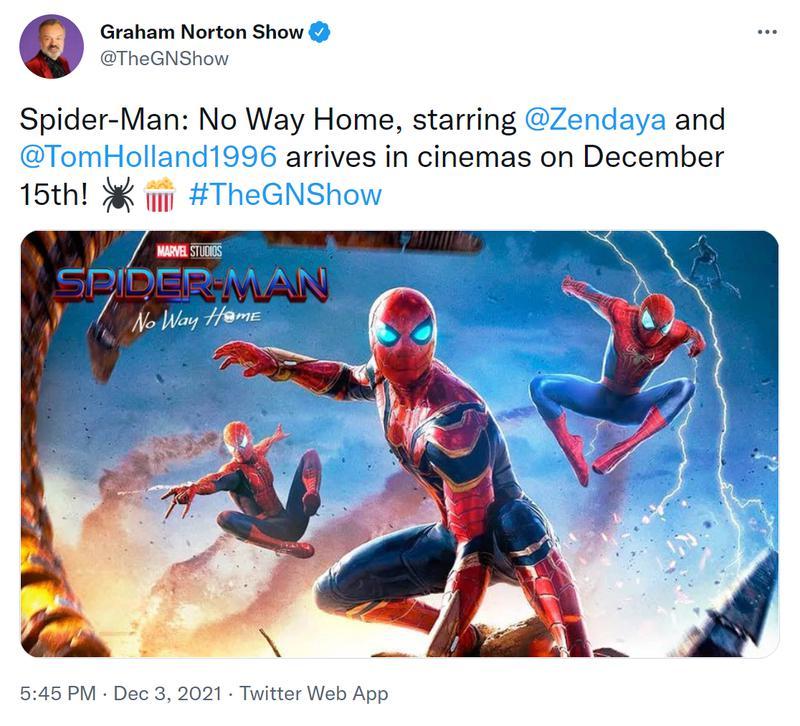 The poster is an edited version of one of Sony’s official No Way Home posters which features Tom Holland facing Doc Ock. This fan-made version also includes Tobey Maguire and Andrew Garfield’s Spider-Men alongside Holland.

Spider-Man: No Way This Is A Real Poster

Given that the fan-made poster used here does build upon a real one that was released by Sony, it seems like an easy mistake for The Graham Norton Show to make. Users in the replies also pointed out that this isn’t the first time the show has used a fan-made poster, having once done the same thing when promoting Doctor Who.

The fact that a poster featuring Garfield and Maguire was used by a prominent name like The Graham Norton Show is a testament to the widespread belief that the two actors will appear in the movie. Rumours about the duo returning in the third Spider-Man film for a Spider-verse style reunion have been running rampant for a while. Garfield has constantly dodged questions about his appearance in the film and Sony has even recut official trailers to remove any hints of Maguire or Garfield’s presence.

As more instances like this occur in the media, it becomes harder to deny the idea that the two previous Spider-Men will be joining Holland in the new film.

Fans will find out definitively when Spider-Man: No Way Home releases on December 17.