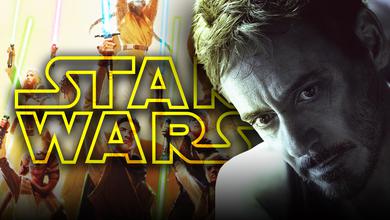 Ever since the conclusion of Avengers: Endgame, fans have questioned whether we've seen the end of Robert Downey Jr. in the MCU. While that is yet to be seen, rumors in recent days now point towards Downey appearing in a whole different universe.

There's been a great disturbance in the Force ever since rumors began circulating about Robert Downey Jr. beomg in talks with Lucasfilm to play a character from that galaxy far, far away. Some have claimed Downey would appear as a well-known villain in the wildly successful Disney+ series The Mandalorian, but others are now reporting something different altogether.

In a tweet by Noah Outlaw from Kessel Run Transmissions that has since been deleted, Outlaw echoed rumors about discussions between Lucasfilm and Robert Downey Jr. However, Outlaw claims Downey wouldn't be playing Thrawn, as many had speculated.

The rumors about Downey playing Thrawn were due to the fact the character was referenced in Season 2 of The Mandalorian and possibility being set up as a significant character in the future of the series.

If Outlaw proves to be correct, that's not entirely bad news for fans since it would confirm Downey and Lucasfilm have been in talks, indicating that Downey isn't ready to step away from Disney franchise storytelling just yet.

But Outlaw isn't the only one known for Star Wars news and scoops talking about this possibility. Daniel Richtman posted a similar rumor on his Patreon page that Robert Downey Jr. and Jon Favreau had discussed working together again with the possibility of a role in the sphere of The Mandalorian. Perhaps Favreau has another well-known Star Wars character in mind for RDJ? Or maybe a whole new character?

Even though Tony Stark's Iron Man story is seemingly complete, that doesn't necessarily mean the same can be said for Downey's story in the world of film franchises. Jon Favreau has made a seamless transition from MCU to Lucasfilm; and since both Downey and Favreau worked together in the early days of the MCU, it wouldn't be a stretch for Downey to follow suit and possibly play a role in the early days of the new direction we're seeing from Star Wars.

This wouldn't be the first time that Iron Man had a "crossover" with The Mandalorian. Favreau has already referenced Tony Stark and the Iron Man films in both Season 1 and Season 2 of the series, making fans of both franchises happy. Perhaps these Iron Man tributes were meant to hint towards something more?