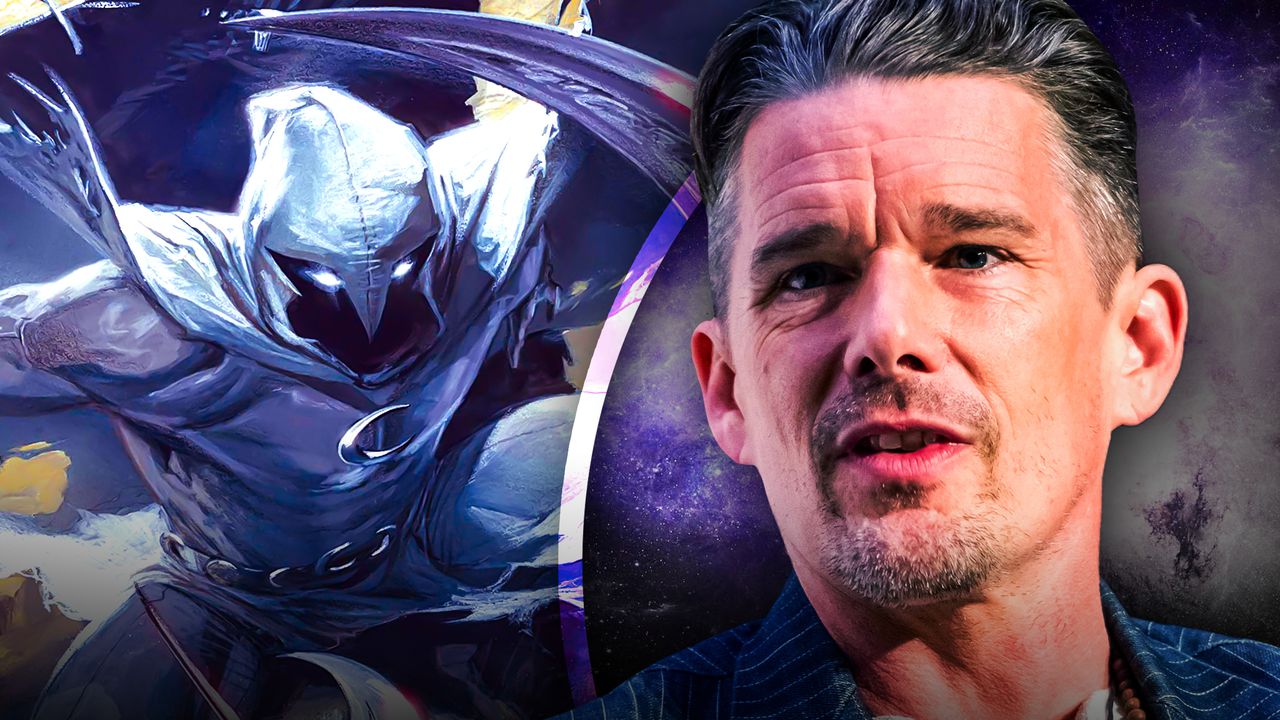 After an 18-month delay for the Marvel Cinematic Universe, the tide is starting to turn as Phase 4 finally kicks off. WandaVision is the first of ten movies and Disney+ shows releasing this year (already bringing rave reviews with it) before a dozen new entries find their way to screens worldwide in 2022.

As has been the case since the MCU’s earliest days, Marvel is finding a way to continue the stories for established heroes while simultaneously introducing new big name actors playing classic characters from the comics. Some of these heroes have had the support of fans behind them for years before their MCU debuts, including darker heroes like Oscar Isaac’s Marc Spector in Moon Knight.

A chat with one of Isaac’s co-stars even reveals how much of an influence he is already having over a year before he arrives on screen.

In a recent interview with The Ringer, via Twitter, Moon Knight star Ethan Hawke explained his reasoning for joining the 2022 Disney+ series. It was reported last month that Hawke had been cast as an undisclosed lead villain in the Oscar Isacc-led Disney+ series.

Hawke was asked what made this project “the one” to join after numerous offers to join superhero franchises in the past. Evidently, it was his connection to leading actor Oscar Isaac, whom he heaped praise upon as “a very exciting player in (his) field.”:

“A lot of it…is Oscar to me, to be honest with you. I find him to be a very exciting player in my field. I like what he’s doing with his life. He reminds me of the actors, when I first arrived at New York, that I looked up to. Oscar’s younger than me, and I like the way he carries himself, and I like the way he thinks. And in general, good things happen when you’re in the room with people that you like the way they think, right?”

Hawke also touched on Moon Knight’s director, Mohamed Diab, in this interview. Looking back on Diab’s recent work and describing him as “a serious person,” Hawke is certain that Diab “is gonna do a great job” as he takes on a hero surrounded by his native country’s mythology.

“(Director) Mohamed [Diab] is gonna do a good job. He's a serious person, I don't know if you guys have seen his films, but he's a serious artist.

Hawke then elaborated on just how big superheroes are in popular culture, implying that he'd like to improve the superhero genre through his work within it:

And you have to speak to your time, right? You can't pretend you don't live in the time period that you live in. You have to try to make your time period better... I don't know if this makes sense of not, but forgive the analogy if it's a little self-aggrandizing or highfalutin. But there's a story about Saint Francis I love. Which is that Saint Francis came to the Pope and he wanted to start his own order. And the Pope wasn't sure whether he was a heretic or not. And he said 'I'll give you your own order. But you have to do it with both feet standing in the church....You can do whatever you want if you change it from within. Don't change it from outside.' I remember reading that story and thinking 'Wow, that's really beautiful.' You can change things from within, you don't have to just try to break things, you know? And so, I'm trying to live in my time. And I'm trying to do good work with the time that I'm given. There's a place for Adopt a Highway and there's a place for The Good Lord Bird. There's a place for a good horror movie."

This part of the interview can be seen in the tweet below:

Ethan Hawke and Oscar Isaac in a TV show together? @ChrisRyan77 and @andygreenwald couldn’t be more excited for it.

Ethan Hawke and Oscar Isaac are both known for flexibility and range in the performances they’ve given over the years. Even so, Isaac is clearly making a strong early impression as Hawke’s biggest reason for joining the Marvel Studios production.

Hawke's addition to the MCU is quite noteworthy considering his less than positive attitude toward Marvel movies, specifically 2017's Logan. With Moon Knight appearing to be something so unique within the MCU, Hawke clearly saw this challenge as something both more in his wheelhouse and as a project that would push him mentally.

On top of everything, his respect and admiration for Diab and Isaac is undeniable in this interview. Working with two professionals who share his work ethic and mindset obviously makes his decision to join the MCU easier as he changes his tune on the genre.

His involvement was reported months ago, although he was suspiciously left out of the Disney Investor Day event in December. After the show’s cinematographer mentioned Isaac by name recently last month, it should only be a matter of time before the world sees this casting become official.

Moon Knight is reportedly starting production next month and will release on Disney+ in 2022.