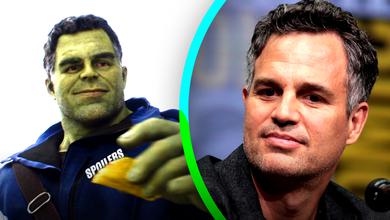 There are a couple of debates that divide Marvel fandoms.

Since joining the MCU, Ruffalo has been notorious for leaking information about his upcoming MCU projects. The Bruce Banner actor has ratted more classified information than Matt Damon in The Departed. I'm very surprised no one has coined the nickname “Narc Ruffalo” yet. Patent pending.

From accidentally live-streaming the first ten minutes of Thor: Ragnarok to dropping that infamous “Wait until you see the next one... Everybody dies!” line during an Avengers: Infinity War press junket, Mark Ruffalo has proved himself to be an absolute liability when it comes to keeping secrets.

While Mark Ruffalo's loose lips have got him in Kevin Feige's principal's office on more than one occasion, the Hulk actor looks to be in on the joke these days.

Taking to Twitter, Ruffalo shared an image of himself beside a screenshot of an iPhone's notes page, which revealed some major spoilers from Ruffalo's past three MCU projects:

- Being a friend from work

me + a random note on my phone pic.twitter.com/8tYN6rKyhf

The Oscar-nominated actor seems to be in on the spoiler joke these days, and it looks like he's enjoying every second of it. While it's unclear when these spoilers were jotted down, it's good to see Ruffalo is waiting an appropriate length of time to discuss classified events with the public.

Despite learning his lesson, Marvel is still highly untrustworthy of their Bruce Banner. For Avengers: Endgame, Ruffalo claims he was given fake scripts that included scenes that were never shot. Even with these fake scripts in place, Ruffalo still managed to unknowingly spoil a major event of Endgame:

“I didn’t even get a whole script of this movie. I don’t know why. The script I did get had dummy scenes in it. [Chris Evans] gets married in this!”

Ruffalo may have somewhat improved when it comes to keeping secrets, but he still thinks his worst MCU punishments are to come.

Here's to hoping the younger Bruce Banner will be able to keep his mouth shut about She-Hulk plot details.