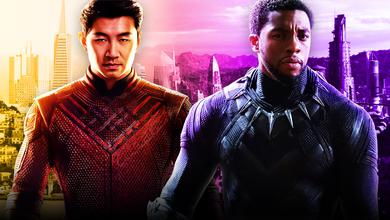 Marvel Studios will be taking its first steps into the expansive world of martial arts movies with the September release of Shang-Chi and the Legend of the Ten Rings. Not only will this movie introduce the long-beloved fighting style along with the MCU's first new hero of Phase 4, it will also be Marvel's first movie featuring a cast primarily of Asians and Asian Americas.

Leading actor Simu Liu has had nothing but praise for this move from Marvel Studios, celebrating the efforts of his castmates and the movie's crew for the wonderful job put forth so far. He's also been vocal for the past couple of years about how much he's loving being a part of the Marvel universe and how excited he is for fans to see the final product.

In his most recent quotes about the film, he took another opportunity to share some love for a project that he's shown appreciation for over the past few months.

GMA released a feature on MCU star Simu Liu and his upcoming movie, Shang-Chi and the Legend of the Ten Rings, particularly how past MCU films have influenced his work in Phase 4.

Liu specifically mentioned the "incredible work" done by the cast of 2018's Black Panther, including the late Chadwick Boseman and director Ryan Coogler. The actor called the film "a big inspiration" for him and his castmates, describing the movie as "a big benchmark" for them that they "hope [they] can live up to:"

"That's a big benchmark for us that we hope that we can live up to. There are millions of kids growing up today that are going to have what I never did, which is... a hero that they can watch onscreen that reflects their lived experiences."

He echoed this sentiment for people coming from "a number of different diasporic backgrounds" that will see themselves represented in this movie:

"And not only one, but you're going to see many over the course of this movie and they're going to come from a number of different diasporic backgrounds.”

Liu spoke of this inclusion being "the key to representation," describing it as being "part of a greater conversation" happening across the world today. The Shang-Chi actor expanded on the situation by explaining that the story is able to "really explore the subtleties and the nuances of that identity" of the cast and "what it means to different people:"

"What we're able to do with a story that features so many Asian characters is really explore the subtleties and the nuances of that identity and what it means to different people.”

REPRESENTATION AND REFLECTION IN THE MCU'S SHANG-CHI

Simu Liu hasn't been one to shy away from expressing his pride for Marvel Studios bringing the MCU's first superhero movie featuring a largely Asian cast, and he's been open on multiple occasions about his respect for what came in the MCU's past.

This is also the second time Liu has explicitly referenced Chadwick Boseman, previously paying tribute to him for setting the stage for Marvel Studios' dive into greater representation. The late Black Panther star's impact clearly went beyond the confines of his own movie, especially considering the way he inspired stars like Liu to fight for the opportunity to have their own shining moment.

Shang-Chi and the Legend of the Ten Rings will debut in theaters on September 3, 2021.