Lucasfilm has released its annual Star Wars holiday card, and the image it depicts shows the company breaking canon in a light-hearted manner as the likes of Ahsoka, Obi-Wan Kenobi, and Darth Vader interact.

The fan-favorite series has had a long relationship with the holidays. Back in 1978, the company released a Star Wars Holiday Special.

Sadly, it was so bad that nearly everyone who witnessed it has personality decided to leave it outside of any canon conversations.

Despite that special not going over well, Lucasfilm started up the annual tradition of sending out holiday cards.

Now, this year’s has been released, and it has some good fun toying with Star Wars canon.

Lucasfilm has come out with its 2022 holiday card, and it’s once again broken canon.

Revealed by Lucasfilms’ Chris Argyropoulos, the scene depicted is quite an interesting gathering. It shows Darth Vader bringing some sort of fish to both Ahsoka and Obi-Wan. Included in the background was Dexter Jetter, Commander Cody, and a handful of droids.

Obviously, this breaks canon because all of these characters would not be able to all be in the same place—but it’s best not to think too into it and just have some fun.

The tradition of Lucasfilm holiday cards have been going strong since the company’s first one first debuted in 1978.

It used a famous illustration by John Alvin as inspiration for R2-D2 and C3P0’s two-man band.

The following year, in 1979, the droids were given some traditional holiday garb instead of a handful of musical intruments. 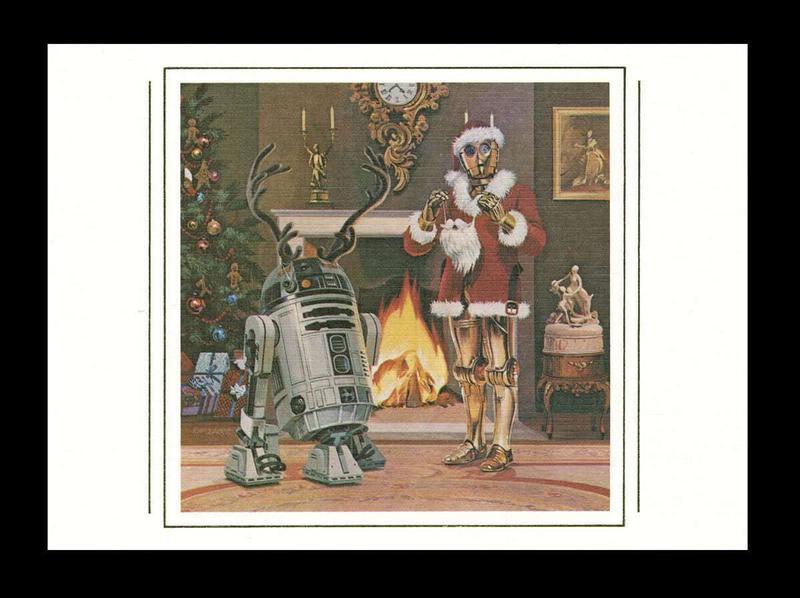 This artwork was used for both the 1980 Lucasfilm holiday card and the Christmas in the Stars holiday album.

In 1981, the attention was give to Yoda as he donned a Santa outfit, There were two different variants at the time, including this blue and white ones.

The 1982 card was a unique one to say the least, as it saw Yoda readying his sleigh, which sports an eye-catching California vanity plate.

For the 1983 card, Lucasfilm focused on the Ewoks, with Return of the Jedi having just come out.

Over a decade later, in 1994, the holiday card showcased a festive Jawa gift exchange.

Many would agree that 1995 is one of their sleekest, with the design of a Death Star ornament.

Another jump in time sees a troupe of caroling bounty hunters, including the now iconic Boba Fett.

Then, in 2015 (despite the card reading 2014), the holiday featured Ezra, Zeb, and Chopper from Star Wars: Rebels.

The card for 2017 was a unique one, which showed Rey and Kylo Ren on opposite sides of each other being illuminated from within.

Obviously, this latest holiday card isn’t the first to break canon, and it isn’t the last. Really, anything that references Christmas would be considered non-canon.

After all, when it comes to fun holiday traditions like this, it’s all in good fun.

Though it’s hard to deny how awesome it would be to see Rosario Dawson’s Ahsoka, Ewan McGregor’s Obi-Wan, and Hayden Christensen’s Vader interact in the same scene. Sadly, it’s a dream that established canon simply won’t allow.

But what might next year bring? With Ahsoka set to debut, many characters from that will surely make an appearance—such as the lead herself, Hera, Sabine, Chopper, Ezra, and Thrawn. If The Acolyte makes it onto Disney+ in time, maybe those from the High Republic can join in on the fun.

The next Star Wars project, The Mandalorian Season 3, is set to debut on March 1, 2023.