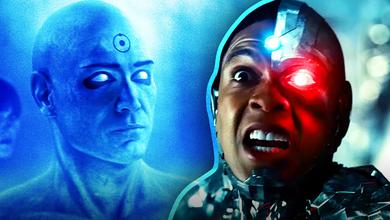 Zack Snyder's Justice League will finally be released next year on HBO Max, providing the loyal fanbase of the visionary director a much-needed win during a pandemic-infused year. Fans have long campaigned for the release of the Snyder Cut for years, especially after the disappointing theatrical release of the film back in 2017 that was filled with a tumultuous production history.

Now, the Snyder Cut diehards will get their wish granted in the form of a four-part miniseries that is poised to expand the Justice League roles of certain characters like Cyborg and Superman. Not only that, the looming threat of Darkseid will be heavily addressed, and the design of the chief villain, Steppenwolf, will be drastically altered as well.

After the release of the black and white version of the Snyder Cut trailer yesterday, the outspoken director has been providing fans with a slew of tidbits about the teaser and the project in general. And now, another one has surfaced, and it features an impressive nod to Snyder's filmmaking career.

In an official Snyder Cut teaser breakdown, Zack Snyder confirmed that the angel statue that can be seen in the trailer is the same one from Watchmen and Sucker Punch.

The aforementioned statue was showcased in the background during Cyborg's emotional moment in a graveyard.

The reveal can be seen at the 31:42 mark of the teaser breakdown below.

Snyder has been known to infuse his films with Easter eggs for fans to pinpoint, and this latest bit is a prime example of that. Aside from Watchmen and Sucker Punch, this angel statue seems to be a favorite for Snyder to include since he already used it as a prop in another film. It was previously revealed that the angel statue was also used on the set of 2013's Man of Steel as well.

This is a notable reference to include since it goes to show the consistent aesthetic of Snyder's previous films. It is widely expected that his version of Justice League will be darker and more aligned with the tone of Man of Steel and Batman V Superman: Dawn of Justice, and it's likely that there will be more callbacks to those aforementioned films to further cement his vision.

Interestingly, Snyder previously revealed that the history lesson scene was influenced by another major film franchise in the form of Lord of the Rings. Given that this Watchmen reference and the previous Lord of the Rings callback was only from a teaser breakdown, it will be interesting to find out if there will be more notable Easter eggs for fans to uncover when the Snyder Cut premieres on HBO Max next year.