Fans have been wondering who would direct the next Avengers movie ever since Avengers: Endgame . Due to the ever-growing presence of cosmic elements in the MCU, some fans have even speculated that James Gunn could take the helm of the next Avengers movie. The Direct even wrote a feature article speculating on who Marvel Studios would most likely choose to direct the next installment with James Gunn being the least likely option.

It wasn't a particularly hard line deduction based on the director's past comments and interests, but, the latest comments from James Gunn himself now make it definitive.

During a road trip with his wife, James Gunn decided to take questions from fans . One asked him "Not sure if you've been asked but would you direct an avengers movie?" with Gunn replying "I haven't been asked, but I wouldn't do it if I was." 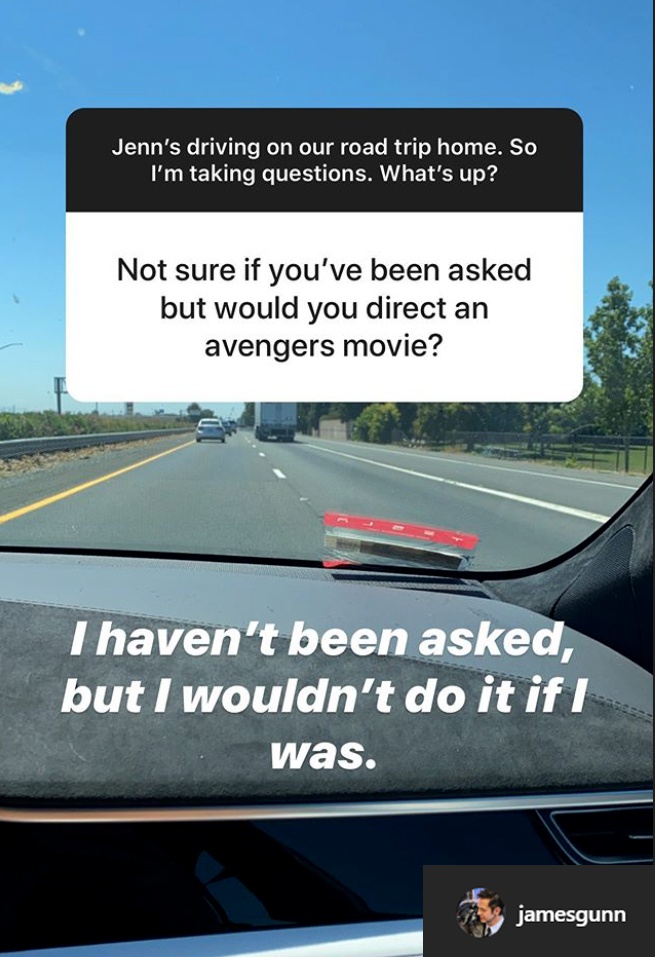 From how the fan asked the question, it's difficult to tell if when they said "if you've been asked" if they were referring to Marvel Studios or other fans already asking this question. From Gunn's answer though, it seems that Marvel Studios hasn't approached him to direct the next (or any) Avengers movie at this point.

Update: In a later question, another fan asks to clarify as to why he wouldn't want to direct an Avengers movie and James Gunn replied saying it "Just doesn't appeal to me." 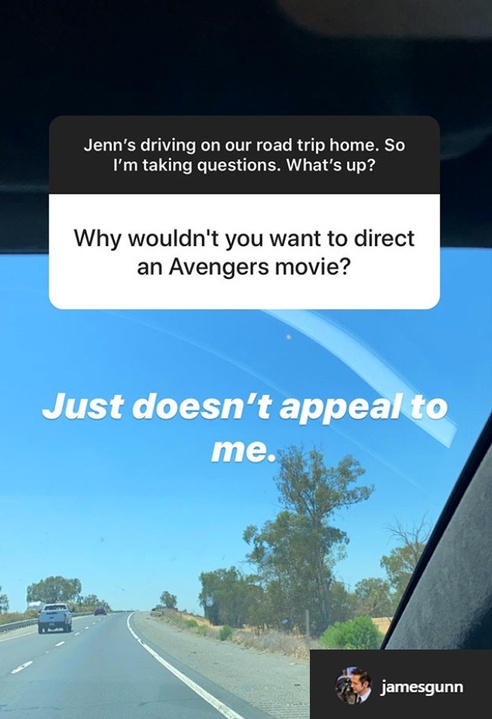 Simply put, as stated in our own feature article, due to Gunn's past work and comments, directing an Avengers movie never seemed to be in his wheelhouse. However, just because Gunn says that he wouldn't direct an Avengers movie, even if Marvel Studios asked, that doesn't mean that he would be done with the studio after he finishes Guardians of the Galaxy Vol. 3 .

He's expressed interest in other Marvel properties like Hit Monkey , Red Hulk , and Thunderbolts with the latter two seemingly becoming more of a possibility considering the swirling rumors about both . However, there's another sad possibility that Gunn might be done with Marvel Studios after Guardians of the Galaxy Vol. 3 and leave it as his swan song.

Maybe a fan could ask Gunn if he has any plans with Marvel Studios after the third Guardians of the Galaxy movie releases.