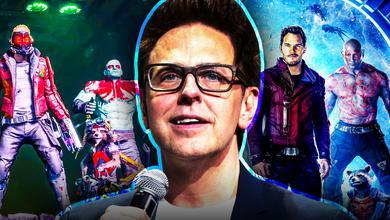 It's been a minute since Marvel's Guardians of the Galaxy Vol. 2 was released in theaters back in 2017.

After director James Gunn's firing and then rehiring coupled with COVID-19 delays, Guardians of the Galaxy Vol. 3 is currently slated for a May 2023 release. But, that doesn't mean MCU fans won't be seeing the Guardians before then.

In addition to their own Christmas special and being part of the cast for Thor: Love and Thunder, fans now have another way to come and get their love.

As part of Square Enix's E3 live stream, the Guardians of the Galaxy game was officially revealed, and the franchise's writer and director James Gunn had a few things to say about it.

The trailer for the new Guardians of the Galaxy game from Eidos-Montreal shows the ragtag crew in action on various cosmic locations and encountering a number of bizarre creatures and monsters.

Speaking of bizarre, in a group shot toward the end of the trailer, Groot appears to be holding a purple llama with orange hair (Fortnite vibes, anyone?) that apparently caught James Gunn's attention.

In a Tweet, the director mentioned how he "can't wait to play and learning more about this llama thing Drax is holding:"

"Haha. Very cool. I can't wait to play and learn more about this llama thing Drax is holding."

In the announcement, the game was described as single-player with a third-person point-of-view and is expected to release on October 26, 2021.

Rumors of a Guardians game have circulated for several years, and this recent announcement only confirmed reports from earlier this month.

However, it's worth noting that in the video game tradition, the ragtag Guardians crew looks a little different from the film's cast of characters. This is expected considering video games usually don't go all-in when it comes to a particular film or franchise.

However, that doesn't appear to be what Square Enix is doing. In fact, apart from the different looks of the characters, this game both looks and feels like a Guardians of the Galaxy project.

James Gunn's signature color palette, witty and irreverent banter, and killer soundtrack are utilized to the fullest in this trailer, and Square Enix's additions clearly have the director's support and interest!

It looks like gamers and Marvel fans will be anticipating the game's release dropping on both next and last-gen hardware on October 26 of this year.