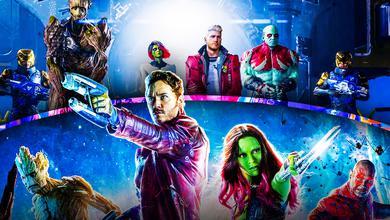 Rumors of a Square Enix-published Guardians of the Galaxy game have swirled for years.

Talk of the project started more than three years ago with Eidos-Montreal taking the helm. The studio most well known for its work on the Tomb Raider games seemed set to dive into the Marvel universe, but no confirmation ever seemed to come to light.

However, with E3 season upon the gaming industry, now is the time for gaming dreams to become a reality.

Guardians of the Galaxy from Eidos-Montreal has been revealed as a part of Square Enix's E3 live stream.

The game will be a story-driven single-player adventure with a third-person point-of-view and was also given a release date of October 26, 2021.

The reveal was followed by a developer deep dive that described the process of working with Marvel Games and what gamers can expect.

And, to finish things off, 11 minutes of gameplay was shown, debuting minute-to-minute what players will be doing.

Players will assume control of Star-Lord, giving commands to the team in combat scenarios.

The team at Eidos confirmed that this will be a galaxy-sprawling adventure with various different ways to accomplish missions.

The game took up over 20 minutes of presentation time as Square Enix's showcase.

A MARVEL TO BEHOLD

This is what comic book video game dreams are made of.

After talk that Guardians of the Galaxy could possibly be a multiplayer or co-op experience, it's music to fans' ears to hear that this will be a single-player experience.

Judging from the gameplay shown, this looks to be a blend of Final Fantasy XV, Uncharted, and Guardians. It features what looks to be an incredibly fun story, with dialogue choices that will have consequences on the overall narrative.

Something that gamers should be excited about is the dialogue choices. From the mission shown off in the brief gameplay revealed, it seems as though players will have the opportunity to tackle objectives in completely different ways based on how they communicate with the team.

Combat-wise, as mentioned above, the game seems similar to FFXV, where gamers assume control of one character (Star-Lord), executing commands to initiate combos with the rest of the Guardians team.

And, it even seems to feature a killer soundtrack to boot. Touching on that soundtrack - something that has become so important to all things Guardians - the game's music seems to be leaning more into the 1980s rather than the '60s and '70s of the MCU counterpart.

Journalists seem to have gotten a look at the game behind closed doors before the reveal and described encounters where Joan Jett's "Bad Reputation" began blasting upon triggering an ultimate ability.

Guardians of the Galaxy drops on both next and last-gen hardware on October 26 of this year.