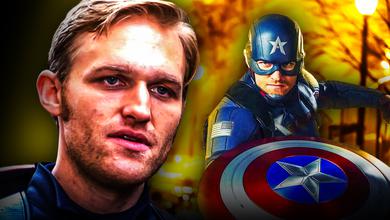 The MCU is going through its first week of a content release hiatus after closing out The Falcon and the Winter Soldier on April 23. Thankfully, MCU fans still have more than enough to talk about. From Sam Wilson's epic Wakanda-tech suit to the implications of Sharon Carter being the Power Broker, the franchise's second Disney+ exclusive is quickly making its mark within the long-standing franchise.

While the show did a great job of continuing the legacy of already existing heroes and villains, it also succeeded in introducing a number of new faces into the MCU for the first time. Some of these new faces like Karli Morgenthau and the Flag Smashers may be down and out for the time being, but others like Wyatt Russell's John Walker are set up for an extended run alongside Earth's Mightiest Heroes.

Walker's introduction was particularly interesting due to the fact that he was the topic of so much negativity from MCU fans in terms of his character. According to the show's leader, this was something the team hoped to change as the series went on...

In an interview with io9, The Falcon and the Winter Soldier director Kari Skogland explored the subject of John Walker and his evolution through the course of the series.

The end of the series shows Walker taking in his new suit for his change into the U.S. Agent, which was the last fans saw of him as he exclaimed "I'm back!" Skogland revealed that this ending was left "a little vague on purpose," although the biggest part of this change was that she "wanted people to like him":

"Well, we left it a little vague on purpose but at the end of the day, I wanted people to like him. And I think everybody does like him. Now, they went through a period of not liking him at the beginning because he started out feeling like 'Wait a second, is that the guy?' But then, through the calibration of performance as such, we realize he’s coming from a very earnest place. No matter what’s going on, he really does want to be a good Cap and he wants to do the right thing. Now, when his ego gets involved and the Dora Milaje take him down and he goes, 'Oh, my God. I’m in over my head,' [that] sort of compels him into a conversation with Lemar and then we realize there’s a bead in there that’s missing. He’s actually a bit of an imposter."

Continuing with the idea of him being an imposter, Skogland teased more to his story when touching on his relationship with the Medal of Honor he mentioned multiple times through the show. She revealed that this is part of Walker's "damaged" story with the medal having been earned for something "that he’s not proud of":

"He alludes to that. “Oh, yeah. that Medal of Honor, that was the worst day of my life.” And we realized, “Oh, something happened there that he’s not proud of.” So he’s actually got a bit of an imposter syndrome. And that makes you go, 'Oh, he’s actually kind of damaged.' So you kind of like him a little bit, even though then he goes on to do something horrific, but you at least understand where it comes from."

The director also gave some insight into Walker's first meeting with Julia Louis-Dryfus' Contessa, who "sort of picks up the pieces" after he is stripped of the Captain America title and his place in the Amy. With Walker making the choice to save lives at the end of the episode rather than go after Karli, she sees this moment as "a bit redemptive" for his character arc.

Then when [Contessa] sort of picks up the pieces after he’s been stripped of everything, I think you hope for him and that’s the most important thing—you just hope for him. And the big point is when he makes the decision to abandon vengeance. He’s got Karli and he’s got the GRC guys who are about to die. What does he do? He makes the right choice for the first time in a long time. And so that’s a bit redemptive.

WHAT THE FUTURE HOLDS FOR WALKER

The last moment for Wyatt Russell's John Walker in Episode 6 saw him taking a ridiculously long time in Contessa's eyes to acquaint himself with his newly designed U.S. Agent costume. After somewhat making amends in the final battle following his dismissal from the Army, he certainly has a chance for his redemption to continue without the weight of being Captain America on his back.

While Russell's next MCU project is still a mystery, there seems to be no doubt that U.S. Agent will return in some capacity in Phase 4 and beyond. This could be in the recently announced Captain America 4 alongside Sam Wilson, or even a Thunderbolts movie should Marvel decide to take that route at a later date. No matter when this happens, fans seem to be excited for this complicated character as he trudges through the MCU.