Doctor Strange 2: Is Mads Mikkelsen Returning as His Marvel Villain? 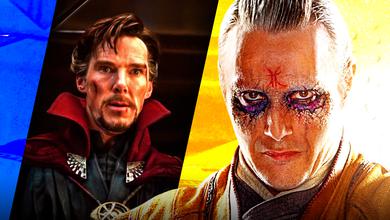 As anticipation builds for Marvel's upcoming slate of Phase 4 films, one of the most intriguing projects has to be Doctor Strange in the Multiverse of Madness largely thanks to that multiversal madness promisted in its title.

While the multiverse has been teased in Avengers: Endgame and Spider-Man: Far From Home, this Doctor Strange sequel looks to be the entry point into multiverse storytelling.

Marvel has already revealed that Elizabeth Olsen's Wanda Maximoff last seen in WandaVision on Disney+ will play a role in the film.

And in addition to the return of Rachel McAdams and Benedict Wong, it was recently stated that the Benedict Cumberbatch-starring sequel was also bringing back the character of Kaecilius from the original 2016 movie.

That news is now being reported as false and attributed to a typo, but is this actually the case?

An article IndieWire originally reported that Mads Mikkelsen was set to reprise his role "as Kaecilius in Marvel's Doctor Strange in the Multiverse of Madness" coming to theaters March 25, 2022.

However, IndieWire later changed the article, claiming that information was a mistake.

Here's a look at the original statement:

"He started rehearsing James Mangold’s “Indiana Jones 5” with Harrison Ford and Phoebe Waller-Bridge, to be followed by a role as Kaecilius in Marvel’s “Doctor Strange in the Multiverse of Madness.” That will bookend the year he began with yet another franchise villain, Gellert Grindelwald, replacing Johnny Depp in “Fantastic Beasts and Where to Find Them 3.”

And now here's a look at the updated statement:

"He started rehearsing James Mangold’s “Indiana Jones 5” with Harrison Ford and Phoebe Waller-Bridge, bookending the year he began with yet another franchise villain, Gellert Grindelwald, replacing Johnny Depp in “Fantastic Beasts and Where to Find Them 3.”

Indiewire Editor at Large Anne Thompson, who wrote the report, indicated that the original article had a typo stating that Mikkelsen would be in Doctor Strange 2.

In the original Doctor Strange, Mikkelson's Kaecilius became disillusioned with the Ancient One and was defeated becoming part of the Dark Dimension.

News that his character was returning was surprising given his fate, but it was worth noting that his original motivation to reunite with his wife and son was similar to that of Wanda Maximoff.

But if Mikkelson isn't returning to the MCU, just who will this sequel's villain be?

WHAT STRANGE MAGIC DOES DOCTOR STRANGE 2 HAVE IN STORE?

Strange and curious rumors & announcements have been swirling around this Doctor Strange sequel since it was first announced.

For instance, the sequel is directed Sam Raimi who just happened to direct the original Spider-Man trilogy.

Ironically enough, Doctor Strange is set to appear in Spider-Man: No Way Home releasing in theaters later this year.

This has led many to wonder if the rumors about Tobey Maguire and Andrew Garfield reprising their roles as Spidey might actually be for the Doctor Strange sequel?

In addition, video has shown Benedict Cumberbatch without his trademark beard, and rumors have been swirling around plans to bring Doctor Strange villain Shuma-Gorath into the MCU.

Fans will definitely know more as we approach the release of Spider-Man: No Way Home and as more news continues to surface about this truly "strange" film's cast.