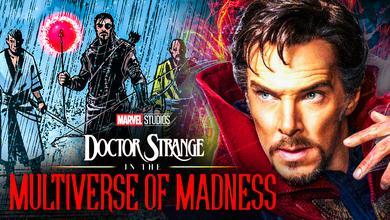 One of the most intriguing, as well as mysterious, films in Marvel's upcoming Phase 4 slate has to be Doctor Strange in the Multiverse of Madness.

The title alone grabbed the fan base's attention when it was first announced, and that was long before audiences ever saw WandaVision or Loki tease Nexus beings and multiversal timelines.

But, as that March 2022 release date draws closer, fans are beginning to hear more about the film's cast, including a few new additions with curious role descriptions.

As first shared by Doctor Strange 2 Updates on Twitter, actress Mara Natuzzi will be playing the role of "Maria" in the Benedict Cumberbatch-starring Doctor Strange in the Multiverse of Madness, according to her profile on Mandy.

Of course, Marvel Studios is keeping many of the film's details under wraps, including this new casting and others.

Maria could be an integral character, or she could be a background character with a placeholder name; however, the role descriptions for others who have also been cast in this film tell us a bit about what to expect next March.

For instance, Multiverse of Madness has also added Mace Smales in the role of a "novice archer," as well as Sandra Chaffey for a role described as a "warrior."

Furthermore, the NYPD may also be in this film at some point as actor Mark Lockhart has been cast as an NYPD policeman.

Naturally, these roles naturally imply that audiences will some archery and battle scenes in the Doctor Strange sequel, but that's not all.

The presence of the NYPD isn't all that surprising or revealing since one of Doctor Strange's sanctums is in New York City.

However, the presence of an archer and a warrior are much more interesting. In fact, this casting news could imply that the film will explore elements of the Dragon Raiders from Marvel Comics who were stopped by the Ancient One and Mordu.

Of all MCU films coming down the pipeline, this sequel may be the most difficult to speculate about considering its multiversal drama. Just about anything could happen. Also, Elizabeth Olsen has admitted that Multiverse of Madness will not only be scary but also misleading.

So apart from Olsen's Wanda, Cumberbatch's Stephen Strange, and maybe Gomez' America Chavez, it's hard to know who the new members of the cast will be or who they might prove to be as the film unfolds next year.

Doctor Strange in the Multiverse of Madness releases on March 25, 2022.