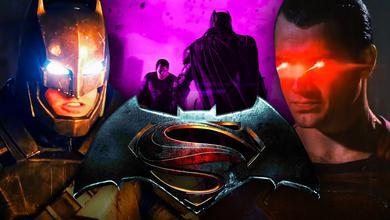 HBO Max and Warner Bros. are deep into the promotional tour for the upcoming release of Zack Snyder's Justice League, which will officially debut in full on March 18. Director Zack Snyder has been as active as ever speaking on what's ahead for this massive project, bringing nearly twice the content of the theatrical cut in just about twice the amount of screen time.

Now that the Snyder Cut is a reality, discussions are already coming to life on other movies within the DC Extended Universe that could potentially receive a director's cut in the future. Batman v Superman: Dawn of Justice was already supplanted by the Ultimate Edition after its release in 2016, and David Ayer has been vocally passionate about wanting the chance to show his true vision for 2016's Suicide Squad in a director's cut as well.

The former of these movies is currently in the news thanks to a late blast of information online.

The Digital Bits has confirmed that the IMAX remaster version of director Zack Snyder's Batman v Superman: Dawn of Justice will be available for a 4K Ultra HD release on March 23 from Warner Bros. Home Entertainment.

YET ANOTHER SNYDER RE-RELEASE

In mid-December 2020, Snyder revealed that he was working on a remastered version of Batman v Superman which included "a bit more" alongside his work on the Snyder Cut of Justice League. This was followed up a couple of weeks later by the very first footage from this remaster of the film, featuring some of the Batman Knightmare scene.

Zack Snyder is undoubtedly passionate about his work with the DCEU. This is likely more so the case due to so much studio interference supposedly disrupting his vision in more than one movie that he's helmed within the franchise. However, of all the films that Snyder has directed or been involved with, this still seems like a strange choice to receive multiple re-releases after debuting in theaters almost five years ago.

Dawn of Justice was met with plenty of controversy upon its arrival for plot points like the death of Superman and the all too infamous "Martha" scene. However, Snyder has stood firmly behind his vision throughout its run, and it will be interesting to find out if there are any changes when the IMAX version of the film releases.

The IMAX edition of Batman v Superman: Dawn of Justice will be available on March 23, 2021. This will come after Zack Snyder's Justice League debuts on HBO Max on March 18.