The Batman: Colin Farrell Reveals How Many Minutes the Penguin Will Be In the Movie 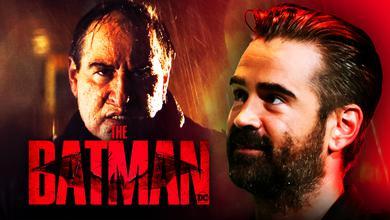 In August 2020, The Batman released its first teaser trailer at DC Fandome. The film was originally supposed to premiere in June 2021, but two delays later and it is set to hit the big screen on March 4, 2022.

Robert Pattinson will play Bruce Wayne, making him the 7th live-action Batman to grace the silver screen. Zoe Kravitz is set to play Selina Kyle aka Catwoman, Andy Serkis is Alfred Pennyworth, Jeffrey Wright is James Gordon, Paul Dano is Edward Nashton aka The Riddler, and Colin Farrell is Oswald Cobblepot aka the Penguin.

Matt Reeves is directing and the film is set in Gotham during Batman's second year of fighting crime. It will take place outside the DCEU and Ben Affleck's Batman.

Even though a teaser trailer was released, the details of the plot aren't clear. A new detail about one of Batman's adversaries has just been revealed.

PENGUIN PLAYS A SMALL ROLE IN THE BATMAN

During an interview with Josh Horowitz on the Happy Sad Confused podcast, actor Colin Farrell revealed that his character the Penguin is only in "five or six scenes" of the Robert Pattinson-starring The Batman. He jokingly said he's excited to watch the film because "it won't be ruined by my presence."

"I'm only in it for five or six scenes, so I can't wait to see the film because it won't be ruined by my presence. It's a freebie for me, I get a little bit uncomfortable for the f***ing nine minutes I have and the rest I cannot wait to see how he brought this world to life. Because the sets were extraordinary, the production design was extraordinary, and his use of music and sound will be extraordinary. And as you said you said the cast, all them from Robert to Zoe."

MORE PENGUIN IN THE BATMAN 2?

In the teaser trailer for The Batman, Farrell was unrecognizable in the makeup and costume of Oswald Cobblepot. It seems that Cobblepot will be more or less introduced in The Batman as a shady criminal/businessman, rather than Batman's main focus.

This leads to the idea of The Batman receiving a sequel where the Penguin could be further explored and even more of Batman's rogue's gallery could be introduced.

It seems clear in the first film that Paul Dano's Riddler will be the main antagonist and who Batman will be trying to take down. The Riddler may be portrayed as a serial killer in this adaptation. The riddles left behind may be more skin-crawling rather than goofy rhymes.

One of the reasons so many fans love Batman is his incredible cast of characters and villains surrounding him in Gotham. Matt Reeves' The Batman seems to be embracing that, using the Riddler as the main villain for the first time since 1995's Batman Forever, while also introducing Cobblepot.

Supporting characters like Catwoman, Alfred, and detective Gordon will also make this Gotham City distinct. It will likely lead into the Gotham City HBO Max series that is rumored to be led by Jeffrey Wright as Gordon.

The Batman will release exclusively in theaters on March 4, 2022.