Avengers: Endgame's Lexi Rabe Has Her Fingers Crossed For Return as Morgan Stark in MCU

Avengers: Endgame delivered a massive and satisfying finale to the MCU's Infinity Saga. On top of bringing together almost every MCU hero in the grand fight against Thanos, Endgame also introduced another important member to Marvel Studios' growing list of on-screen characters in the form of Morgan Stark. Much to the delight of the fans, the daughter of Tony Stark and Pepper Potts made her debut in iconic fashion as she delivered one of the memorable lines of the film , "I love you 3000."

It remains to be seen if Morgan will return at some point in the MCU. However, Lexi Rabe, the young actress who plays Morgan Stark , recently took to Instagram to tease if she will be part of another project in the billion-dollar franchise.

In one of her recent Instagram posts , Lexi Rabe replied to a question from a fan who asked if she will return to the Marvel Cinematic Universe. Rabe playfully answered with a fingers-crossed emoji (🤞) and a peace sign ( ✌️ ). You can check out their interaction below. 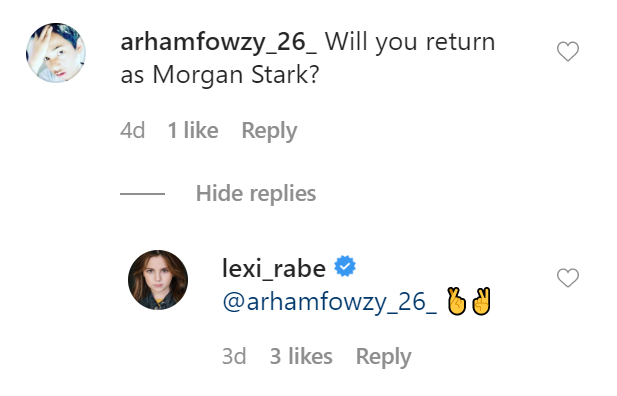 With the legacy of Tony Stark intact in the post-Infinity Saga world of the MCU, the return of Lexi Rabe's Morgan Stark at some point is close to inevitable - it is just a matter of when and how the character will return. The prime candidate for when the character would return seems to be the rumored Ironheart Disney+ series which is set to be focused on Riri Williams and the legacy of Iron Man.

It has been known for a while that Gwyneth Paltrow will not be returning to the MCU as Pepper Potts, so it could make sense for another character close to Tony to make a connection with Williams. A cameo from Rabe as Morgan would further establish the MCU's Iron Man lore. Additionally, by the time Ironheart debuts, Rabe will have aged a few years, so Morgan Stark will likely be more aware of some potential secrets that were left for her by her father.

A return from Rabe could bring in a brand new dynamic for the Disney+ series, as it could give Morgan something to do while she waits for her turn to don the armor. It might be a while before her potential inheritance of the mantle of Iron Man down the road. However, the further development of a Stark in the MCU would carry on the family name in the highest-grossing box office movie of all time, much to the delight of most fans.