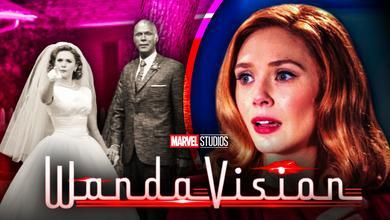 Even though MCU fans are three episodes into the studio's third Disney+ series Loki, WandaVision will always be the series that started it all.

And even though Elizabeth Olsen, Paul Bettany, and Kathyrn Hahn were the show's brightest stars, the same could be said for the series' catchy tunes penned by songwriting power couple Robert Lopez and Kristen Anderson-Lopez.

The lyrical duo's themes not only paid homage to classic television series like The Dick Van Dyke Show and Bewitched, but also managed to reflect the narrative of each episode.

But much like scriptwriting, songwriting also requires an additional draft or too; and the lyrics heard in the pilot episode of WandaVision weren't the words that first appeared on the episode's script.

The script for WandaVision's pilot episode shared to Deadline from Marvel shows the original lyrics that both Robert Lopez and Kristen Anderson-Lopez wrote for the pilot's '50s theme.

As a refresher, here are the first few lines of the tune that made it into series and on Disney+:

A regular husband and wife

Who left the big city to find a quiet life

Now here's a look at the lyrics that first appeared in the script:

"Oh, After the moment they said 'I do'

Fresh from the newlywed kiss

They moved to the 'burbs to embrace domestic bliss!

Apart from the "WandaVision" refrain, the first draft of the theme has a number of differences. But it's worth noting that words that actually made it into the show establish Wanda's determination to appear "normal" from the get-go.

Now here's the final part of the theme that made it onto Disney+:

"She's a magical gal in a small-town locale

He's a hubby who's part machine

How will this duo fit in and fulfill all?

And again, here's the second half of the song that appeared in the script:

"Can a magical wife lead a typical life

With a husband who's part machine?

How will this duo fit in and pull through? Oh,

Clearly, Robert Lopez and Kristen Anderson-Lopez didn't make nearly as many changes in this half of the song with the main difference being the switch from "typical life" to "small-town locale."

IT WAS THE SONGWRITERS ALL ALONG

From the script's cover page, it appears that these original lyrics from the couple were added on November 1, 2019, while WandaVision didn't actually debut on Disney+ until January 15, 2021.

Naturally, that considerable length of time allowed for changes and improvements as is the norm at this phase in pre-production. However, it's still interesting to see what the songwriters initially had in mind for their first theme; and surprisingly, their initial vision for the song remained largely intact.

Robert Lopez and Kristen Anderson-Lopez had a reputation for penning earworms even before WandaVision. The two actually wrote the songs for both Disney's Frozen and Pixar's Coco before tackling the MCU.

And it's safe to say that with "Let It Go" and the now-famous "Agatha All Along" attached to their names, it probably won't be the last time they get a call from Marvel Studios.