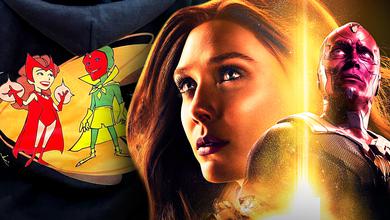 Marvel Studios' WandaVision recently wrapped its production and was at long last given a release date by Disney+. The first of WandaVision's six episodes will release on January 15, 2021.

While the majority of the series' plot details are still being kept under wraps, the show follows Wanda Maximoff, who's living in a dream-like, sitcom world with her dead robot boyfriend, Vision. The trailer seems to indicate that things go awry in Wanda's altered reality pretty quickly, though.

Now that WandaVision is finished filming, series leads Elizabeth Olsen and Paul Bettany have sent out gifts to the cast and crew, including a sweatshirt featuring art from Marvel Studios concept artist Andy Park and a hat featuring the show's logo. Park has taken to Instagram to show off the presents:

Look what I just got in the mail! WandaVision Cast & Crew hoodie & hat! The hoodie is a crew gift from Wanda & Vision themselves- Elizabeth Olsen & Paul Bettany! Thank you! (Per their request I got rid of the pumpkin Vision was holding)

It was certainly a thoughtful gesture on Paul Bettany and Elizabeth Olsen's part to give such gifts to each of the cast and crew on WandaVision.

The artwork featured on the sweatshirt might be familiar to fans by this point as it has been seen a few times before. It definitely takes stylistic inspiration from the 1960s sitcom Bewitched, which is very much appropriate given that WandaVision will have at least one episode which homages various eras of sitcoms.

The Bewitched nod is even more fitting since there has been an indication that Wanda Maximoff will finally receive her comic book codename of The Scarlet Witch in the upcoming series.