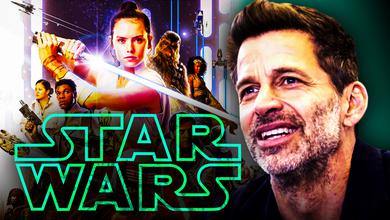 Zack Snyder has to be one of the most talked-about filmmakers today. Since making his first feature film in 2004, he has done lots of work in the superhero and comic book genres.

The recent release of Zack Snyder's Justice League garnered worldwide acclaim after its debut on HBO MAX earlier this year, and the consensus amongst fans is that it was a much better version than the theatrical version released in 2017. However, beforehand, Snyder reportedly had plans to tackle another major franchise.

During a creative limbo between 2012 and 2015, before Disney began its take on the franchise with Rebels and, eventually, The Force Awakens, Snyder hoped that Lucasfilm would "Give me the keys, let me take her [Star Wars] for a spin." Sadly, though, the Star Wars spin-off never came to fruition. However, it seems like the Man of Steel director may still be taking us to a galaxy far, far away. It might just not be the one we're used to.

In a new interview with Happy Sad Confused podcast, via ComicBook.com, Zack Snyder revealed that there were talks for him to direct a Star Wars spin-off, confirming long-time rumors that circulated the internet almost a decade ago.

Back when Snyder was first launching his Superman reboot in 2013, there were rumors that he was going to helm a Star Wars film. One of the most popular theories was that this would be a darker take on Yoda's backstory, though speaking to the Happy Sad Confused podcast, he failed to clarify if any popular characters were to be in his film.

Snyder did, however, confirm that he "talked about" his Akira Kurosawa-inspired Star Wars spin-off with Lucasfilm, but that it never quite got off the ground. That hasn't stopped his desire to still make the film, as he hopes that someday to make a version of it "away from the Star Wars universe:"

“Yeah… we talked about it but it never… you know. I’ve been working on it – just away from the Star Wars universe – just on my own, just as a sci-fi thing… It’s still a sci-fi thing, it’s the same story, just kind of now I let Star Wars be Star Wars and I’m just gonna… you know. The eleven-year-old me still wants to make that, now I just know how to – so maybe we’ll see that someday.”

SNYDER TAKES ON BOTH DC AND STAR WARS

In recent years, Snyder has developed a dedicated and outspoken fanbase of DC fans who love Man of Steel, Batman v Superman, and Zack Snyder's Justice League. The #ReleaseTheSnyderCut garnered worldwide acclaim and led to similar attempts such as #ReleaseTheJJCut, where people saw the outcome of applying pressure to big studios and hoped to replicate this with The Rise of Skywalker. The most recent addition to the core Star Wars films, though one many saw as a disappointment when it was released in late 2019.

It is clear that Snyder's work on Justice League has done much to change how people interact with film, and the success of the Snyder Cut proved that his very visual style of filmmaking resonates with audiences. Many would be intrigued to see his take on Star Wars and how his signature style would translate to the galaxy far, far away whereas others may be hesitant.

Snyder encountered many issues working with Warner Bros., and some may be worried about another studio trying to tone down his vision or not being comfortable with some creative choices he would want to make.

To some extent, 2016's Rogue One: A Star Wars Story had this issue. The version prior to the final cut worked "on the presumption that Disney wouldn’t allow characters to die with such abandon," according to writer Gary Whitta. It wasn't until Tony Gilroy was brought in that Rogue One became what it is today, as he believed the brutal ending was necessary for the story to work.

Star Wars is a different franchise than DC, and Disney a different company than Warner Bros., so it remains to be seen just how that partnership would play out in practice. There is also the impact that Justice League had on moviegoers and just how much the controversy surrounding the film has changed how studios approach their most beloved franchises.

As it stands, though, a Snyder fronted Star Wars spin-off may never see the light of day. The director seems more than happy to "let Star Wars be Star Wars" and follow his own vision away from big cinematic franchises.

Should he pursue his Star Wars script, then fans will still get a taste of a Snyder version of this beloved sci-fi universe. It just might take on a slightly different shape than the one rumored around the internet almost a decade ago.