Star Wars: Unusual Item From The Empire Strikes Back Sees Return in The Mandalorian Season 2 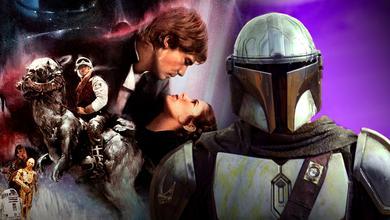 Season 2 of The Mandalorian premiered on October 30 on Disney+ and kicked off with Mando and The Child back on Tatooine looking for another Mandalorian. Who they find is Cobb Vanth, the marshal of Mos Pelgo, wearing Boba Fett's signature armor.

Appropriately titled "The Marshal," the episode delivered a great story coupled with equally great action; but, in the fashion we've come to expect from The Mandalorian, it was packed with nods and Easter eggs to other stories from the Star Wars Universe, including the use of an object from Knights of the Old Republic and a reference to a scene from Return of the Jedi. This debut episode also included another object we've seen before both in The Empire Strikes Back and in The Mandalorian.

In "Chapter 9: The Marshal," the audience sees a flashback of Cobb Vanth stealing an object known as a camtono containing valuable crystals. He then used the crystals to trade for Boba Fett's armor.

Camtonos are cylindrical containers in the Star Wars Universe that are usually used to carry valuable metals, crystals, or spice. Audiences first saw a camtono in The Empire Strikes Back when a character named Willrow Hood carried one under his armor after Lando Calrissian warned Cloud City about the Empire's arrival. But, back then, the item was a bit of an inside joke among fans because it resembled (and in reality was) an ice cream maker!

Jon Favreau and Dave Filoni, who were both familiar with this fan joke, decided to bring back the camtono in Season 1 of The Mandalorian when it was used to hold beskar. Fans loved that the show's creator chose to not only reference but actually use the camtono. Seeing it used again in Season 2 was another welcome surprise and yet another nod to the original Star Wars trilogy.

The Mandalorian is proof that fan service isn't necessarily a bad thing when it's done well; both Favreau and Filoni are becoming masters at offering audiences a new, fresh story while weaving items and story points from Star Wars lore into the fabric of their storytelling.

It wasn't long ago that uniting the Star Wars fan base seemed like an impossible task, but with Favreau and Filoni at the helm, they're showing future Star Wars writers and directors that this is the way.