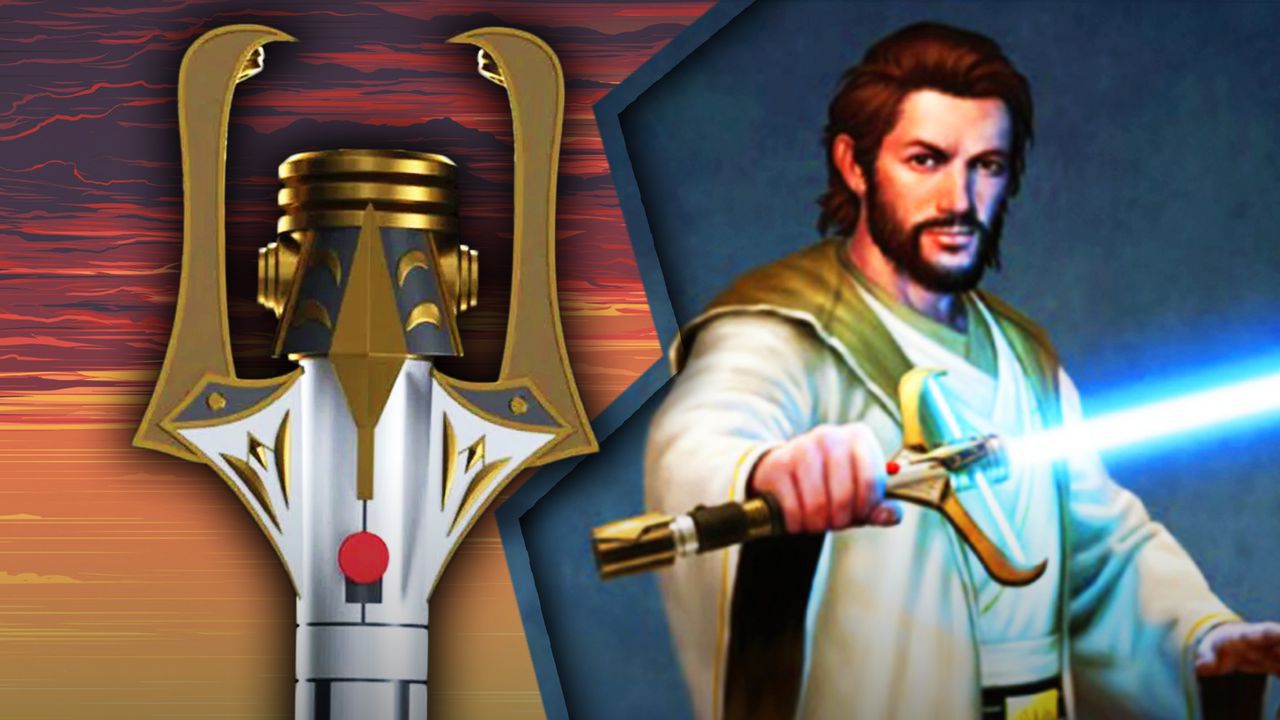 Star Wars: The High Republic is poised to offer fans a whole new experience in the galaxy far, far away with a new wave of prequel stories. Set to debut next year, The High Republic presents a collection of stories during the golden age of the Jedi Order, effectively expanding the lore of the space opera franchise.

The marketing for The High Republic ramped up in recent weeks, teasing fans of what to expect. Previously, the first chapter of Charles Soule's The Light of the Jedi was revealed, and it gave a preview of the state of the galaxy 200 years before Star Wars: The Phantom Menace.

Additionally, Soule previously discussed the massive scale of stories set within The High Republic, declaring that the project is going to be "wild." And now, a new piece of promotional material tied to The High Republic has surfaced.

Star Wars officially unveiled a sneak peek of the lightsaber of Stellan Gios, a Jedi Master during the High Republic era. The lightsaber of Gios will be featured in Insight Editions’ The Lightsaber Collection that will be released next month.

The new lightsaber showcased a unique design similar to a sword with a gold-infused color palette.

“We wanted to make the Jedi distinctive and instantly recognizable as Jedi Knights of the High Republic, and that applies not only to their clothing but to their lightsabers, as well. Internally, we often refer to the Jedi of this era as ‘the Jedi Knights of the Round Table.’ Taking that idea one step further, their sabers can be viewed as their own versions of Excalibur.”

Meanwhile, Disney Publishing Illustration Manager Jeff R. Thomas opened up about the unique design of Stellan's lightsaber, admitting that he looked at "the iconic lightsabers that have already been established:"

“When designing Stellan’s lightsaber, I looked at the iconic lightsabers that have already been established. He needed an iconic weapon that could stand beside the other famous lightsabers, but at the same time be unique to him and evoke the time period of the High Republic.”

Thomas also mentioned that they wanted to "implement a more traditional crossguard," including the "saber-blade into the crossguard design:"

“With the High Republic, we wanted to implement a more traditional crossguard, but I still wanted to include the saber-blade into the crossguard design, so that Stellan would be able to defend himself against saber attacks. That’s where Excalibur came into play. What would a lightsaber version of Excalibur look like? I started sketching and came up with a silhouette I really liked, but the practicality of holstering/sheathing it nagged at me until I had the idea that the crossguard didn’t have to be stationary. Perhaps it could activate or deactivate with the saber. So after some more sketches and some back and forth with Lucasfilm, it was decided that the crossguard would activate as opposed to always being open, which would give the saber the slimmer silhouette while holstered and would lend itself to some great visuals when activating.”

Based on this reveal, it's safe to say that The High Republic will showcase more unique designs, and this lightsaber is a prime example of that. It appears that exploring an unseen era from Star Wars has proven beneficial to the writers and artists of this prequel project, giving them more leeway on what designs to include.

Siglain's reveal about The High Republic featuring similar elements from the medieval time period such as Jedi Knights of the Round Table and the Excalibur lightsaber design is another example of how this new project will elevate the franchise in exciting ways. If anything, it will be interesting to see if there will be more surprising takes for The High Republic to explore, giving more reason for fans to read the next wave of stories.

At this point, it's safe to say that The High Republic is shaping up to be one of the most exciting Star Wars projects in the works right now. It remains to be seen if Lucasfilm will look to adapt The High Republic in live-action format, but the recent tease from the creative team clearly shows that it has potential to expand the narrative of both the movies and TV shows in surprising ways.