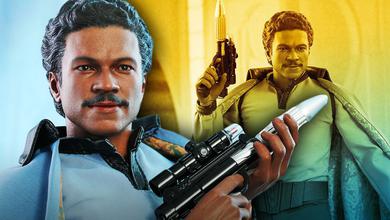 Hot Toys are known for their highly-detailed collectible figures that come from a range of various pop culture franchises. One of their most popular IPs is Star Wars, with the company frequently releasing products based on the license.

Often, Hot Toys will release figures based on films and television series that have been released recently. This has included new figures of Ahsoka and the 501st Battalion Clone Trooper from the seventh season of Star Wars: The Clone Wars.

These have been joined by collectibles of Captain Rex, Anakin Skywalker and Obi-Wan Kenobi, all of which depict the characters in their Clone Wars attire but bear likenesses to their live-action counterparts of Temeura Morrison, Hayden Christensen and Ewan McGregor, respectively.

Sometimes, though, the toy manufacturer decides to look back at past entries in a franchise. That is the case this time around with Hot Toys producing a figure of a much-beloved character from The Empire Strikes Back...

This incarnation sports his outfit from The Empire Strikes Back, when fans were introduced to the character at Cloud City.

Like all Hot Toys, the faces of its figures have striking resemblances to their on-screen counterparts. This figure is no different, with the Lando collectible being the spitting image of Billy Dee Williams.

Lando can, of course, be posed with other Hot Toys figures. Here, he stands beside collectibles of Boba Fett and Darth Vader. You can practically hear Lando grumbling "This deal is getting worse all the time!"

This 1/6th scale figure of Lando is extremely posable, proven here as he stands in an action pose. As signified by the small emblem in the corner, this figure is being released in celebration of the 40th anniversary of The Empire Strikes Back. This product joins various others that also celebrate the iconic sequel.

A Hot Toys collectible would not be complete without a set of accessories to come with it. Lando comes fitted with his trademark outfit and flowing cape, his wrist link, a communicator/comlink, an alternate blaster, a background insert, a stand, and six different hands to customize the figure with.

The announcement was accompanied by the following product description:

In his youth, Lando Calrissian™ was a sportsman seeking a fortune at the sabacc tables. After he lost his beloved ship to Han Solo™, Lando spent years living the high life and pursuing get-rich-quick schemes, with uneven results. He went semi-respectable as the baron administrator of Cloud City, only to be drawn into the fight against the Galactic Empire.

Celebrating the 40th anniversary of Star Wars: The Empire Strikes Back, Hot Toys is thrilled to continue expanding the series of throwback collectibles based on this iconic film and delighted to officially introduce the new 1/6th scale collectible figure of many fans’ beloved smooth talker – Lando Calrissian!

The highly-accurate Lando Calrissian collectible figure is skillfully crafted based on his appearance in the movie featuring a newly developed head sculpt with astonishing likeness, meticulously tailored outfit and cape, two blasters, a communicator, a wrist link, a figure base with Cloud City backdrop all in a specially designed retro style packaging!

Once again, Hot Toys has done an outstanding job capturing both the likeness of Billy Dee Williams and the charm of Lando himself. Fans will be sure to want to get their hands on this collectible figure, which is likely to hold extra value given its special release for Empire's 40th anniversary.

A release date has yet to be confirmed, but collectors will surely want to keep an out for when they can add Lando Calrissian to their collection.