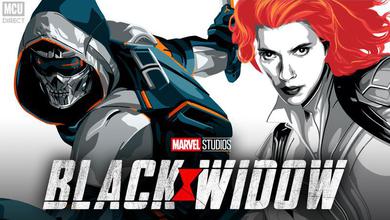 Recent events with the COVID-19 outbreak have put the world on pause, including the Marvel Cinematic Universe. While the release date for Black Widow is currently unknown, anticipation for Natasha Romanoff's first solo-outing remains high. Scarlett Johannson's portrayal of the Russian spy has been a constant in the MCU since 2010's Iron Man 2, and despite always being a supporting character, she quickly became a fan-favorite. Black Widow is still scheduled to open Phase 4 of the MCU, and despite unexpected delays, promotion for the movie still lives on.

These images are standard promotional art, as they do not reveal much that fans don't already know. Nonetheless, the two Black Widow images utilize a familiar Marvel color style, in that they are black and white with red highlights. Fans may recognize this technique from its repeated use in trailers for Avengers: Endgame, where scenes from the past were often stylized in a similar way. The third image, that being of the Taskmaster, furthers the intrigue behind his identity. In previous trailers, fans noticed Taskmaster landing a dropkick similar to one Iron Man hit on Thanos in Infinity War, as well as claws that bear a striking resemblance to Black Panther's. The similarities to Captain America when Taskmaster showed off his shield were also picked up on; however, this image of Taskmaster's pose showcases that the villain's similarities to the Star-Spangled Man expand beyond common accessories. The Taskmaster's abilities include mirroring the fighting styles of his/her opponents, so fans should expect numerous nods to other Avengers when he/she does battle in Black Widow.