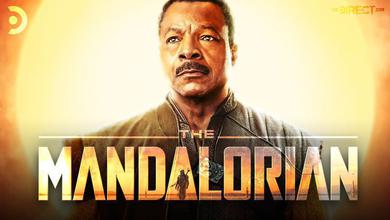 On May the 4th, also known as Star Wars Day, Disney+ released the first episode of a new series titled Disney Gallery: The Mandalorian offering a peek behind-the-scenes at the making of the hit series. Each episode has had its own theme or focus with a blend of photos and clips from filming coupled with a roundtable discussion by the cast and directors. The third episode which was released today focused on The Mandalorian's main cast of characters, including Pedro Pascal's Din Djarin, Gina Carano's Cara Dune, and Greef Karga played by Carl Weathers. During one of the roundtable talks, creator and showrunner Jon Favreau revealed some surprising information about Weathers' character.

When discussing Carl Weathers and his character of Greef Karga, Jon Favreau said the following:

"But then [Weathers] came in and talked and we were like 'How are we going to cover his face up with prosthetics?'"

Favreau agreed that continuing to use Weathers in the series but in this fashion simply wasn't going to work saying,

"So the first thing was, he can't be an alien, like, how are you gonna cover that? Cause they did a drawing with Carl with the makeup on, and I said to Carl, 'We can't cover you up,' and he's like 'I figured as much.'"

"...I'm thinking 'Okay, why would you do that?' Because people are going to tune in if you got the name, so why not have the face?"

While Weathers' character of Greef Karga isn't in every episode of The Mandalorian's first season, he has a significant role in the series. The fact his role was supposed to be much more limited than what it became echoes J.J. Abrams' decision to not kill of Poe Dameron's character as originally written in The Force Awakens and make him a core part of the cast. It also shows that Favreau, Filoni and others are more focused on what works for the story and the best use of its characters than living or dying by the script. Pedro Pascal, who plays the Mandalorian or Din Djarin, even commented in this episode that they were open to experimenting and rewriting on set.