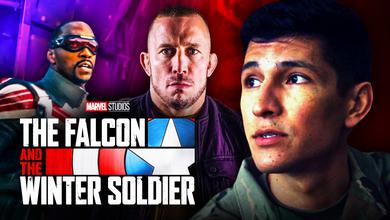 With just about two weeks having passed since the MCU's last piece of in-universe content released, chatter is still running wild over the events in the franchise's second Disney+ exclusive, The Falcon and the Winter Soldier. Anthony Mackie and Sebastian Stan led the way in their first lead billings with Marvel as Sam Wilson and Bucky Barnes adapted to a changed world, helping to build on Steve Rogers' legacy as Captain America.

One aspect for which the show received due praise was its use of intense action sequences which rivaled the top scenes fans have seen throughout the MCU's theatrical releases. The VFX crew did an exceptional job in giving this show the same level of production quality as the Captain America movies, making its leading heroes look flawless as they took on new challenges in the streaming world.

Additionally, the show's VFX supervisor recently revealed some insight into one such scene that had to be cut from the show's premiere episode.

A TORRES SCENE LEFT ON THE TABLE

The Falcon and the Winter Soldier VFX supervisor Eric Leven sat down with Screen Rant to discuss some of his work on the MCU Disney+ series.

When asked if there were any sequences that got cut from the series, Leven clarified that it was more "moments in sequences" rather than entire scenes that were left on the table. Specifically, he mentioned a portion of the opening scene from Episode 1, "where instead of just Sam saving Captain Vassant," Joaquin Torres would be fighting terrorists as well.

In the end, this portion was removed "for time and budget" when the final cut debuted:

"No entire sequences, but I would say there were moments in sequences. For example, very early on in the skydiving sequence, there was a whole bit where instead of Sam just saving Captain Vassant, there was going to be a bit where Torres goes and there are terrorists coming in trucks. We just cut it for time and budget, and it made the sequence a lot tighter and better. But there were little bits like that here and there."

A SLOW BUILD FOR THE NEW FALCON

Sam Wilson's second scene in The Falcon and the Winter Soldier showcased his fighting skills and Stark Tech wings in action as he rescued Captain Vassant from George St-Pierre's Georges Batroc and the LAF. However, Leven's quotes indicate there was originally a bigger role for Danny Ramirez's newly introduced Army lieutenant in that sequence as well.

Joaquin Torres saw only limited screen time in four episodes of the project, as he built a relationship with Sam Wilson. However, one thing to keep in mind is his character's evolution into the new Falcon in Marvel Comics, which is a real possibility after where he was left in this series.

While Torres' scenes didn't really include any action sequences, it's quite likely that he will make good use of the currently broken Falcon wings Sam left in his possession during Episode 5. Couple that with the fact that Marvel Studios reportedly loves what Ramirez is bringing to the story, and he seems to be set up for an extended run through the MCU, perhaps with his next appearance as early as Captain America 4.

All six episodes of The Falcon and the Winter Soldier are available to stream on Disney+. The Marvel Studios' Assembled episode centered around this series is also on the streaming service.