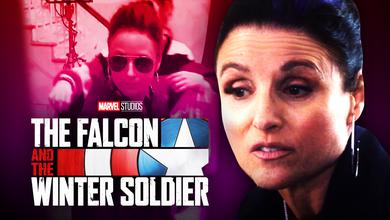 Warning: This article contains spoilers for Episode 6 of The Falcon and the Winter Soldier.

The Marvel Cinematic Universe is seeing quite the evolution thanks to its first two series exclusively premiering on Disney+ in 2021. WandaVision helped expand the magical realm of the franchise before Wanda Maiximoff teams up with Doctor Stephen Strange in 2022, while The Falcon and the Winter Soldier showed Sam Wilson's struggle with taking over for Steve Rogers before finding his place as a new hero alongside Bucky Barnes.

As is the case with almost every new project in the MCU, both Disney+ shows introduced fans to new characters while bringing shocking reveals with nearly every passing episode. Part of this came through both shows' casts and crews hyping major cameos that would come in the final episodes of both of their runs on Disney+.

For WandaVision, audiences were treated to an almost hilarious disappointment when Paul Bettany said the major cameo was just himself as White Vision. However, The Falcon and the Winter Soldier delivered on this tease in a big way, which was just explored more in a new social media blast.

In a post on her Twitter personal account, new MCU star Julia Louis-Dreyfus shared a 13-second video of herself as Contessa Valentina Allegra de Fontaine on the set of The Falcon and the Winter Soldier.

In order to maintain the secrecy of her cameo, she wore a long black cloak with a full hood to hide her costume before she entered her first scene. Louis-Dreyfus took this precaution in stride, even joking in her post that she's "worn it every day since."

They snuck me onto set every day in this stunning hooded cloak. I have worn it every day since. Obviously. @MarvelStudios @falconandwinter #Val #ContessaValentinaAllegraDeFontaine pic.twitter.com/3ACQh5Olw6

YOU DON'T KNOW THE POWER OF THE DARK SIDE

This is far from the first time Marvel Studios has taken these kinds of measures to hide either a major cameo like Louis-Dreyfus' or a major plot point coming in any of its projects. After all, this is the same team that literally drove Samuel L. Jackson from his trailer to the brink of the set to hide his post-credits appearance in 2008's Iron Man.

Marvel deserves a great deal of credit here considering that nobody predicted either Val's introduction into the MCU, or the fact that Louis-Dreyfus would be taking on this intriguing role, before she appeared on screen in Episode 5. This is especially impressive since her character was initially meant to debut in Black Widow, but that was adjusted since it now doesn't release until July.

While this may be the MCU's most recent major cameo, it surely won't be the last with another ten projects coming between June and December of this year alone. As the franchise takes an unexpected seven-week break from in-universe content, fans now anxiously wait to find out what big-name talent will be the next to join this story.

All six episodes of The Falcon and the Winter Soldier are now available to stream on Disney+.