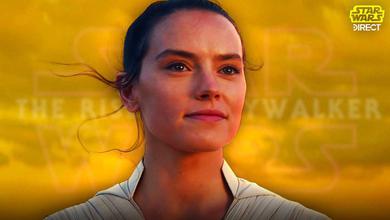 Since the release of Star Wars: The Rise of Skywalker in theaters back in December, members of the cast and crew have been commenting on the film's mixed reception and sharing insight into what went on behind-the-scenes and why. Editor Maryann Brandon has discussed the trilogy's lack of a singular vision, and co-writer Chris Terrio revealed the film's number of rewrites. Director J.J. Abrams has even commented on the criticism saying that the film's fans and critics can both be right.

Several months after the The Rise of Skywalker's release, fans are now finally hearing from Daisy Ridley, the actress who played Rey in this recently concluded sequel trilogy of the Skywalker Saga.

On the DragCast Podcast (via EW), Daisy Ridley claimed she was surprised by the critical response to Star Wars: The Rise Skywalker.

"It’s changed film by film honestly, like 98% it’s so amazing, this last film it was really tricky... January was not that nice. It was weird, I felt like all of this love that we’d sort of been shown the first time around, I was like, 'Where’s the love gone?'"

Ridley also touched on her own unique perspective since making the film was a positive experience for her, as well as how fan response has changed due to social media.

"I watched the documentary, the making-of [The Skywalker Legacy], this week... And it’s so filled with love, and I think it’s that tricky thing of when you’re part of something that is so filled with love and then people [don’t like it]. You know, everyone’s entitled to not like something, but it feels like it’s changed slightly. But I think in general that’s because social media and what have you."

Finally, Ridely talked about how difficult it was to avoid the negativity surrounding the film.

"I guess now conversations are just more public, so there’s stuff I wouldn’t have seen, but honestly trying to scroll through my newsfeed in January and trying to not see Star Wars stuff, I’d see headlines and be like 'Oh my god this is so upsetting... So it’s been tricky, but then it’s having that thing of I feel really proud of it, and I’m so thrilled to be part of it."

Ridley's surprise at the backlash is suprising in itself, especially after the negative response towards Star Wars: The Last Jedi in 2017. Ridley may have thought bringing back J.J. Abrams for The Rise of Skywalker would guarantee the same positive reception as The Force Awakens. Her comments reveal the reality of how an actor's experience in making a film doesn't guarantee the same experience for the audience.