After it was announced that Black Widow would be delayed, fans became worried that it wouldn't receive a theatrical release, despite Disney reportedly still pursuing one. Variety reported last month that Marvel Studios claimed pushing the release date of Black Widow back would not affect the MCU timeline.

Now, not only has a new release date for Black Widow been announced by Disney, but all of the movies on Marvel Studios’ upcoming slate also have new release dates in order to accommodate for the shift.​

This will be the second biggest gap between MCU movie releases since The Incredible Hulk and Iron Man 2, which was 688 days. This gap between Spider-Man: Far From Home and Black Widow will be 493 days. Audiences are now forced to wait another six months for their MCU movie fill, creating almost a year and a half gap between Marvel Cinematic Universe film installments.

Corrected (thanks @SamHowe14) : There are many, many more important things happening in the world, but when Black Widow opens, it will be the longest stretch without a Marvel movie since the gap between Incredible Hulk and Iron Man 2 a decade ago. https://t.co/W44kzNfBc6

This delay could also be a benefit for certain movies, like Doctor Strange in the Multiverse of Madness which lost Scott Derrickson as director several months before shooting was to begin. Now that it has been delayed another six months, it could give Sam Raimi more time to craft his own vision for the movie.

There is currently no official word on if Marvel Studios' Disney+ series slate will be adjusted.

Here is an updated visual timeline for all of Marvel Studios' upcoming movies and shows: 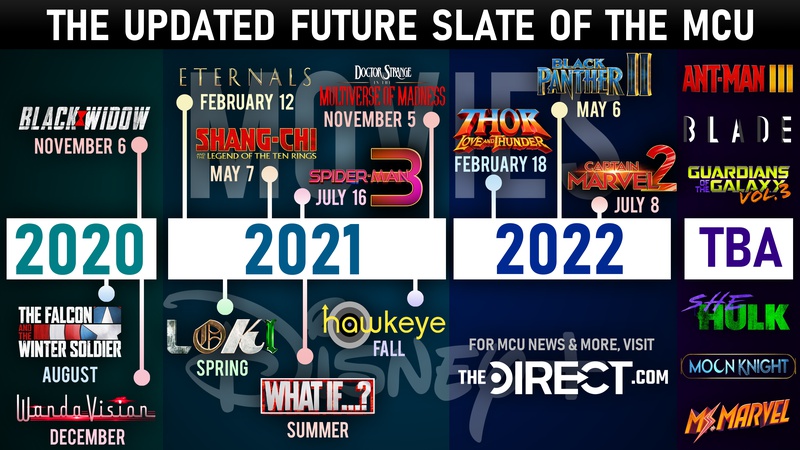