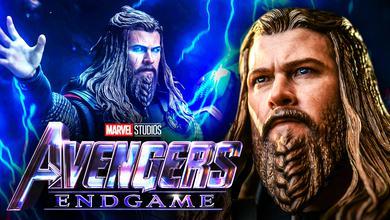 One of the biggest surprises from Avengers: Endgame was Thor's physical changes after five years of doing nothing but drinking beer and playing video games with Korg and Miek.

This was the introduction of Bro Thor and the out-of-shape God of Thunder that has hit an all-time low. Chris Hemsworth wore a fat suit in order to cover up his six-pack and pull off this new look.

At the end of the film, fans got the treat of seeing Thor back in action, wielding both Mjolnir and his newly acquired Stormbreaker. Instead of re-chiseling his body in Endgame, Bro Thor remained in his stocky build for the final fight.

A new look at the final battle Bro Thor gives fans a detailed look at the character's unique look.

A detailed look at Chris Hemsworth's Bro Thor in Avengers: Endgame has been revealed in a new 1/6th scale collectible Hot Toy via Facebook.

This is the final product, upgraded from the previous figure. According to Hot Toys, the new figure "features a newly developed head sculpt with a pair of different colored eyes and specially applied luminous reflective effect that accentuates Thor using his thunder power."

The first image shows a full-body look at Thor holding Stormbreaker and Mjolnir. Compared to the movie, this model looks a little slimmer than the on-screen portrayal.

The next photo displays lightning around the God of Thunder and a closer look at his scarred face.

This incredibly close-up image shows the great detail of Thor's braided beard and his dual-colored eyes after one was replaced.

The final image shows Thor in a fighting stance, ready for battle, and lighting that features a LED light-up function will be included with the toy.

Soon, Thor will be back to looking like the King of Asgard, but it's nice to see a well-crafted figure celebrate this one-of-a-kind version of Thor.

The face, beard, and armor details are especially impressive. This collectible is a must-have for any MCU Thor fan or Hot Toy figure collector, especially coming from such a historic comic book film that was a celebration of the connected universe Marvel Studios created over 11 years.

Some fans were disappointed in the direction of Thor after he seemingly reached his peak powers in Thor: Ragnarok and Avengers: Infinity War.

However, he is a character that lost more than any other character in the MCU. Compile that with the fact that he failed to kill Thanos, and it's completely believable that Thor would let himself go physically.

This new collectible highlights the power of Thor during his final movie in the Infinity Saga. Despite his less-than-ideal physical fitness, he was still the God of Thunder and wielding two incredibly powerful weapons.

Avengers: Endgame is now streaming on Disney+, and Thor: Love and Thunder is set to release in theaters on May 6, 2022.