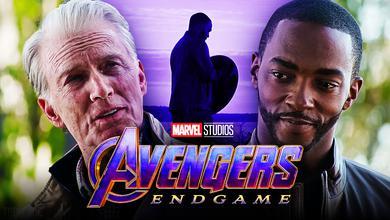 2021 has been a breakthrough year for the Marvel Cinematic Universe, which is an enormous feat considering how overwhelmingly successful the franchise's first 13 years have already been. WandaVision earned rave reviews at every turn during its eight-week run on Disney+, and this trend looks to fully continue as The Falcon and the Winter Soldier prepares for its debut on March 19.

This story will pick up directly from the end of Marvel Studios' major culmination movie from Phase 3, Avengers: Endgame. This movie closed out stories for a handful of the MCU's biggest stars, including Chris Evans as Captain America as he passed the proverbial torch to Sam Wilson in the movie's final scene.

This moment was obviously kept a secret from most before it was filmed, although Evans' scene partners recently described how they found out about what was happening.

SPOILER ALERT FOR MACKIE AND STAN

In the recent issue of Empire magazine, via @jamesbuchqnan, The Falcon and the Winter Soldier stars Anthony Mackie and Sebastian Stan reveal how they learned about the final scene of Avengers: Endgame.

Mackie was at MCU star Chris Evans' house for a football game when Evans sat him down for a private moment to show him the script for the scene in which Cap passes the shield and mantle to Sam Wilson. Describing it as "a fun, emotional moment that we shared with nobody else," Mackie learned that he would be the next Captain America while Evans was excitedly "pacing back and forth" with anticipation:

“Chris Pratt was holding court, and so (Evans said) ‘Come downstairs, I want to show you something.’ He was like ‘Have you seen the final scene?’ I’m like ‘No.’ So he runs out, gets the script, and he literally sits me on the couch, and the whole time I’m reading it he’s just pacing back and forth like ‘Oh my God, oh my God!’ It was a fun, emotional moment that we shared with nobody else.’”

As for Stan, he found out on the day the scene was shot from directors Joe and Anthony Russo when "someone handed (him) the scene on the spot in (his) costume." Stan learned that he and Mackie "both walked that day very differently" as he found out that Steve gave the shield to Sam Wilson:

“I found out the day that we were shooting, when someone handed me the scene on the spot in my costume. I turned to the Russos and said ‘Oh, so he gets the shield, right?’ They were both like ‘Yeah.’ I was like ‘Oh, okay, I just didn’t know.’ We both walked that day very differently.”

Stan seemed to be more than content with Sam getting the shield instead of Bucky Barnes, unsure of "where the character would have gone" if it had been the other way around. He even confirmed that Bucky "was not in a place for that, mentally" after the trauma he'd endured for decades:

“It never really made sense to me - he just was not in a place for that, mentally. I’m not sure where the character would have gone even if that had happened.”

THE PASSING OF THE CAPTAIN AMERICA TORCH

Avengers: Endgame was one of the most heavily guarded movies in history in terms of its plot, which is quite appropriate considering it closed out the first chapter of the biggest franchise of all time at the box office. For both Stan and Mackie to find out about their fates in the ways they did seems to be right in line with how fans could have expected it to happen.

It also continues to show just how close these actors are when they're not making Marvel blockbusters, considering Mackie was at Evans' house with Star-Lord actor Chris Pratt just to watch a big game. Even in that setting, it's heartwarming hearing that the two were able to get a moment to themselves so that Mackie could find out about the biggest plot point in Falcon's character arc to date.

As for Falcon getting the shield instead of the Winter Soldier, Stan feels this was the right decision when looking at Bucky's stability within the MCU.

This is a character who had undergone decades of torture and mind control, finally starting to find his right mind again when he turned to dust during The Blip. Now that he's returned after five years to a world that's even more unpredictable than it was when he left, it's clear that Stan knows the difficult journey ahead of Bucky to find himself again before taking on more responsibility.

This story will continue when The Falcon and the Winter Soldier premieres on Friday, March 19, 2021, exclusively on Disney+.