Warning: This article contains potential spoilers for The Clone Wars

When Star Wars: The Clone Wars was cancelled in 2013, the show had about two and a half seasons remaining until its planned end. The show has since been revived for a 12-episode final season, of which we're on the verge of completing as The Phantom Apprentice continues the Siege of Mandalore. While losing the majority of the episodes intended to be part of the series was a travesty, the hiatus between the show's cancellation and return has allowed for neat opportunities to connect multiple projects from the canon. The first episode of the Siege saw the Clone Wars debut of Gar Saxon and an earlier arc brought Ursa Wren into the fold, both previously seen in Star Wars Rebels . A reference was made to the crime syndicate Crimson Dawn by Maul himself, and The Phantom Apprentice provided an exciting glimpse at the former Sith Lord's cruel puppet in charge of the organization...

During a brief hologram chat with the leaders of the Shadow Collective syndicate, we caught a short look at Maul convening with non other than Dryden Vos, as shown in the screencap below: 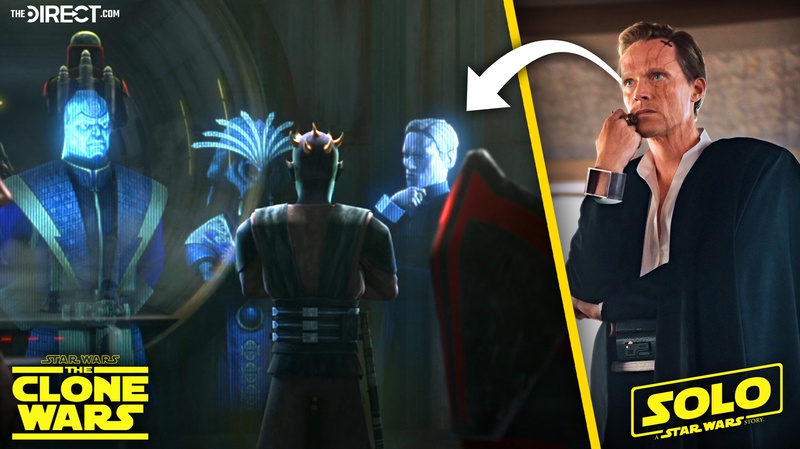 The connections being made by Dave Filoni to newer canon media has been fantastic. Seeing characters appearing from other films and shows really makes the storytelling in the universe feel connected in ways that couldn't have been possible before the show was initially cancelled. Dryden Vos (portrayed by Paul Bettany) seems to be plucked right out of the frames from Solo: A Star Wars Story , wearing his trademark classy suit to complement his fearsome thinking pose. Maul's appearance in Solo was a surprise to be sure, but a welcome one - one that opened up the possibilities of what the renegade Sith Lord could be up to after Order 66. Seeing him conversing with Dryden Vos and making earlier mention of Crimson Dawn really connects the Maul we see in The Clone Wars to the older crime boss who threatens Qi'ra in Solo . Dryden was a neat character in Solo , and though there's little room for him to show up again in this season of Clone Wars , his continued inclusion in Star Wars projects means there's a chance we'll see more of him and Maul in the future. Filoni has done outstanding work with the entire final season of The Clone Wars , especially with the Siege of Mandalore, and we hope to see more surprise appearances in the last two episodes of the show.